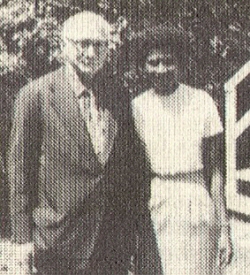 Cyril Briggs was a pioneering civil rights activist, journalist, black nationalist, and member of the American Communist Party. Born in 1888 on the Eastern Caribbean island of Nevis, Briggs immigrated to New York City in 1905 and joined a burgeoning community of radical West Indian intellectuals in Harlem. In 1912 be was hired at the New York Amsterdam News where he voiced support for World War I and Woodrow Wilson’s anti colonial doctrine of self-determination, which he saw as validating his own radical vision of African American self-rule.

Further radicalized in the wake of World War I and the Russian Revolution, Briggs started publishing his own periodical, the Crusader, in September 1918 and one month later founded the African Blood Brotherhood (ABB).  Incorporating Marxist class-consciousness under the banner of “Africa for Africans,” the Crusader and the ABB became vehicles for Briggs’ distinctive merger of interracial revolutionary socialism with black nationalism and anti colonialism.

In 1921 Briggs formally joined the nascent American Communist Party (CP). As the ABB increasingly merged ideologically and organizationally with the CP, Briggs, along with fellow Harlem radicals Otto Huiswood and Claude McKay, became a critical bridge between black communities and the Communist movement, an association that would grow in both numbers and significance over the next two decades. Briggs’ conversion to revolutionary socialism drew him into a public feud with Marcus Garvey and the Universal Negro Improvement Association in the early 1920s. Briggs castigated Garvey’s brand of black nationalism for its capitalist overtones and ultimately cooperated with federal authorities investigating Garvey for mail fraud. Briggs’ influence in Party circles declined rapidly in mid decade as the CP shifted its focus away from the community based revolutionary nationalism of the ABB and toward the labor movement and the newly formed American Negro Labor Congress.

Despite a brief resurgence in 1929, when he assumed a major role in directing the Party’s campaign against vestiges of racial chauvinism within Party ranks, Briggs was increasingly marginalized and accused of sectarianism. Briggs’ removal from the editorship of the League of  Struggle for Negro Rights’ Harlem Liberator in 1933 and the Party’s ideological turn toward the Popular Front in the mid 1930s effectively signaled the end of his influence in radical politics.