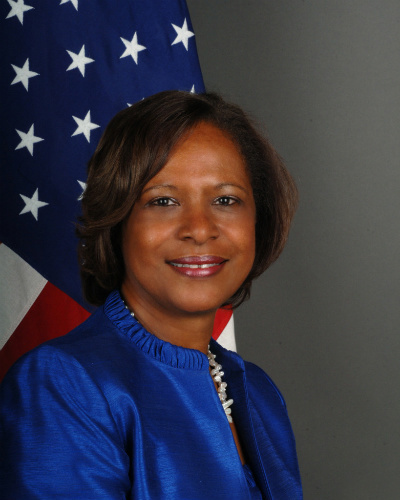 Pamela E. Bridgewater is a career Foreign Service officer who has been recognized for important diplomatic work in South Africa, Ghana, and Liberia.  Her most recent posting was as U.S. Ambassador to Jamaica.

Bridgewater joined the U.S. Foreign Service in 1980, serving as an analyst and diplomat in the Bureau of European Affairs, the Bureau of Oceans and Environmental Affairs, and the Bureau of Intelligence and Research.  Beginning in 1990, Bridgewater was appointed to serve as a political officer in South Africa, then undergoing a transition away from apartheid.  Bridgewater was not only the first African American woman to be appointed to the region but she was also the longest-serving American diplomat in South Africa.  In 1993, she became U. S. Consul General in Durban, South Africa, working closely with Nelson Mandela until 1996 when she was posted to Nassau, Bahamas as Deputy Chief of Mission.

After completing a term in the U.S. State Department’s Senior Seminar, created to train foreign policy experts, Bridgewater served as U.S. Ambassador to Benin in 2000.  By 2003, Bridgewater was appointed U.S. Deputy Assistant Secretary of State for African Affairs.  During these years, she also worked as the State Department’s Special Coordinator for Peace in Liberia which was undergoing a second civil war.  Bridgewater led efforts to establish peaceful elections which took place in 2005.  On her return to the U.S., Bridgewater served as diplomat-in-residence at Howard University in Washington, D.C. before taking an appointment as Ambassador to Ghana between 2005 and 2008 and as Ambassador to Jamaica between 2010 and 2013.

During her many years in the Foreign Service, Bridgewater received two Presidential Meritorious Service Awards, the Department of State’s Superior Honor award and the Secretary of State’s Career Achievement Award, among other public recognition.