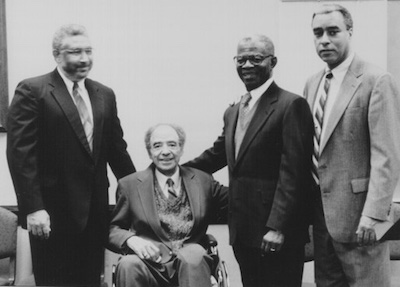 Ruffin Bridgeforth, president of the Genesis Group and priest in the Church of Jesus Christ of Latter-day Saints (LDS), was born in Melville, Louisiana, on March 18, 1923. His father, Ruffin Sr., and mother, Mary Adams Fips, had four children together.

Bridgeforth moved from Louisiana to Utah in 1944. He worked for the US Army and later became a conductor with the Union Pacific Railroad. In 1946 he married his first wife, Helena Marie Romero. Nine years after his migration to Utah, Bridgeforth converted to the Mormon faith in 1953. At the time, the official LDS ban on black priesthood was in place, and Bridgeforth was one of a few hundred black Mormons in the church worldwide.

Bridgeforth formed a partnership with two other black Mormons, Darius Gray and Eugene Orr, in Salt Lake City. They discussed the LDS Church’s position on blacks in their religion. In 1971 they communicated with LDS President Joseph Fielding Smith their concerns about the ban on priesthood for black males and other rites (ordinances) that were reserved for white Mormons. President Smith sent three white high-ranking church officials (two of whom were future LDS presidents, Gordon B. Hinckley and Thomas S. Monson) to begin a dialogue with black Mormons in June of 1971. Later in October, President Smith authorized the establishment of the Genesis Group, an auxiliary body within the Church that focused on black Mormons.

Bridgeforth was selected president of the Genesis Group. Darius Gray and Eugene Orr were nominated to be first and second counselor, respectively. Early on in the group’s history, there were conflicting visions about the mission of the Genesis Group. While Eugene Orr sought immediate granting of black priesthood, Bridgeforth argued for more gradual inclusion. Bridgeforth envisioned Genesis not only to retain black members, but also to preach the LDS faith to non-Mormon blacks.

The Church lifted the one-hundred-and-twenty-nine-year ban on black men as priests on June 8, 1978. Soon after black Mormon men were permitted to be priests, membership in the Genesis Group began to dwindle. This reduction was the result of competing obligations for members (Genesis Group members still had to fulfill their church duties), some black Mormons feeling segregated in Genesis rather than included in the larger LDS Church, and black Mormon men no longer being barred from becoming priests. The Genesis Group stopped holding meetings in 1987, though it was never disbanded, and Bridgeforth remained its president.

Bridgeforth was one of the first black Mormons to be ordained in the LDS priesthood following the removal of the ban. He also became the first black Mormon to be ordained in the high priesthood of the church. As high priest, Bridgeforth had permission to officiate church doctrine and ordinances and to perform roles of lower-ranking priests. Bridgeforth was part of a group that endowed (an LDS ordinance) Jane Elizabeth Manning James, a black woman close to LDS founder Joseph Smith, by way of proxy in 1979. His action was predicated on what he believed were racist ideas that were outside forces negatively influencing the practice of the gospel. As such, he counseled black Mormons who struggled with racism within their wards. Bridgeforth married his second wife, Betty Johnson, in 1981 after the death of Helena Romero. Ruffin Bridgeforth passed away on March 21, 1997, in Midvale, Utah.