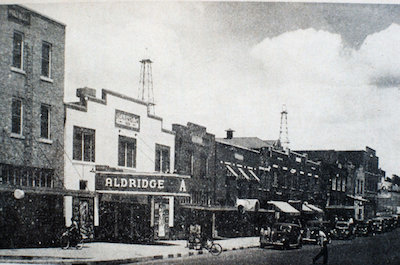 Like the rest of Oklahoma City, Bricktown began with the Land Run of 1889. At the junction of the Oklahoma railroad station and the Oklahoma River, the land that is now Oklahoma City and its surroundings was especially appealing to both farmers and settlers who wanted to establish a town. By the end of the day on April 22, 1889, Oklahoma City had over 10,000 residents, including freedmen looking for a better life in the West. To oversee the settlement, federal troops from Fort Reno established a fort east of the Santa Fe Railroad tracks and north of the Oklahoma River. When these troops withdrew, wholesalers and distributors took advantage of the location and developed it into a warehouse district.

At the turn of the century, jobs in the warehouse district attracted many African American families. By 1910, over 7,000 African Americans lived in Oklahoma City, mostly east of the Santa Fe tracks. White city officials felt threatened by the possibility of integrated neighborhoods and passed one of the first segregationist residential ordinances in the nation in 1915 that confined black families to a neighborhood north of Bricktown along 2nd St. This neighborhood came to be known as Deep Deuce, and it and parts of Bricktown became the center of the black community in Oklahoma City.

The same year that Oklahoma City passed its segregation ordinance, Roscoe Dunjee founded the Black Dispatch, the first newspaper written for Oklahoma City’s black community. The newspaper’s offices in Bricktown also became the site of Oklahoma City’s branch of the National Association for the Advancement of Colored People (NAACP). Bricktown was also the site of the all-black Frederick Douglass High School, which became one of the best schools in the region. J.A. Brazelton, the founder of the Oklahoma Association for Negro Teachers, and Dr. Frederick Moon, a civil rights advocate and educator, both worked at Frederick Douglass High School and lived in Bricktown.

In the 1920s, Deep Deuce became a self-sufficient black community with a thriving entertainment industry, including the Alderidge Theatre, Slaughter’s Hall, and Ruby’s Dance Hall and Grill. These venues hosted jazz legends like Ella Fitzgerald and Duke Ellington, and were the first places local jazz musicians Jimmy Rushing and Charlie Christian ever played. Like many black communities in segregated cities across America, Deep Deuce was socio-economically diverse: doctors, lawyers, and property and business owners lived next to and attended shows with warehouse workers and housekeepers.

The Bricktown and Deep Deuce neighborhoods suffered as the farming, distribution, and wholesaling industries experienced a severe decline during the Great Depression. In 1934, Frederick Douglass High School was relocated to Eastside Oklahoma City. As distribution companies and railroads went bankrupt, the warehouses of Bricktown were abandoned or destroyed. Oklahoma City’s downtown core moved northward. As cars and suburbanization changed the American city in the 1940s and 50s, parts of Bricktown and Deep Deuce were demolished to construct the I-40 and the 235. When Oklahoma City finally desegregated, the black families of Deep Deuce and Bricktown moved to suburbs east of the city. Very few of the black-owned businesses survived.

In the 1980s, developer Neil Horton purchased plots in Bricktown and Deep Deuce. During the economic boom of the early 1990s, Oklahoma City approved the Metropolitan Area Projects (MAPS) program, investing public funds into revitalizing the area as a historic district. While Bricktown and Deep Deuce are now Oklahoma City’s trendiest areas, most of the new residents are wealthy, college-educated, young white people. Deep Deuce only has one black-owned and operated business left, Chaya Fletcher’s Urban Roots restaurant, which also serves as a museum of Deep Deuce’s heyday.