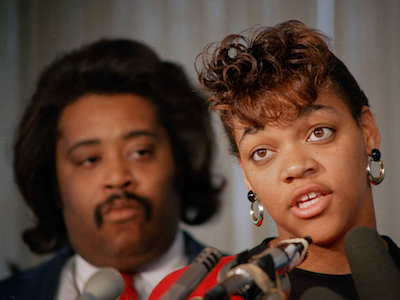 Tawana Brawley is an African American woman from Wappinger’s Falls, New York, who became known when she was 15 years old in 1987 for wrongly accusing four white men for brutally raping her in Dutchess County.

On November 28, 1987, Brawley, who had been missing for four days, was found seemingly unconscious in a garbage bag outside her family’s former apartment. With burned and torn clothes, she was covered in feces and had racial slurs written on her body. Brawley explained that she was abducted by car, brought to the woods, and then sexually abused and forced into oral sex. Brawley indicated one of the men who assaulted her was a white cop.

The allegations divided New York City and much of the state, as racial tensions had been growing from recent cases including a white mob attacking three black teens in Queens a year earlier. The Brawley family retained two attorneys, Alton H. Maddox Jr., and C. Vernon Mason. They also made Rev. Al Sharpton a key advisor. Brawley’s family and supporters continuously asserted that Brawley had been raped and rallies were held through the nation seeking justice for the teenager.

A week after Brawley was found, Fishkill Police Officer Harry Crist Jr. was found dead in his apartment. Brawley’s advisors believed Crist was a suspect, along with Dutchess County prosecutor Steven Pagones, who provided an alibi for Christ, and Scott Patterson, a friend of Crist and Pagones. Without proof, Brawley’s lawyers accused them of kidnapping, abusing, and raping Brawley.

After a seven-month investigation, a grand jury concluded in October 1988 that Brawley’s accusations were false and she had not been abducted or the victim of racial and sexual assault. Police reports, medical examinations, and more than 100 testimonies led to conclusions that Brawley’s story was fabricated.

Evidence presented to the grand jury showed Brawley hid in her apartment during her disappearance. She also self-inflicted,  potentially with an accomplice, her injuries and condition including crawling into the garbage bag, damaging her clothes, writing racial slurs, and rubbing dog feces on her body. Brawley also pretended to be in a traumatized daze and actively mislead doctors, police, social workers, and reporters with false complaints. There was no medical evidence of sexual violence and Brawley’s only injury was a small head bump rather than severe trauma.  Finally it was found that Crist’s suicide had no connection to the case.

Brawley’s motives remained unclear because she refused to testify. Evidence indicated her actions might have been attributed to the wrath of Ralph King, her mother’s boyfriend, for staying out late and skipping school. Brawley had been reluctant to go home because of King, who had a history of violence including being jailed for seven years for murdering his first wife. Additionally, Brawley’s mother had beaten her for spending nights with boys.

Currently, Brawley is working as a licensed practical nurse at the Laurels of Bon Air in Richmond, Virginia. Records show that Brawley, under the names “Tawana Gutierrez” and “Tawana Thompson” has held nursing licenses since 2006. Questions still remain, but Sharpton and Brawley remain unapologetic to their case.

“Evidence Points to Deceit by Brawley,” The New York Times,