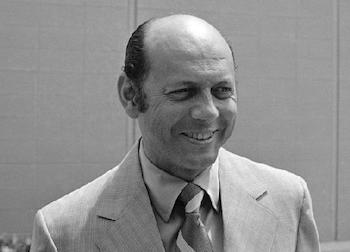 Legal and civil rights activist Leo Branton, Jr. was born in Pine Bluff, Arkansas on February 17, 1922 to Leo Branton, Sr., and Pauline Wiley.  His father ran a family-owned taxicab business and his mother was a school teacher. Branton received a bachelor’s degree from Tennessee State University in Nashville, Tennessee in 1942. He served in a segregated unit of the United States Army during World War II.

After the war, Branton earned a degree from Northwestern University School of Law in Chicago, Illinois in 1948, becoming the first African American graduate of the school. He then moved to Los Angeles, California, and started the first black-owned law practice in the state. Branton filed and won several cases against the Los Angeles Police Department for mistreatment of African American residents.

In 1952, Branton joined civil rights attorney Charles Garry in a campaign to save the life of Robert Wesley Wells, a black man slated for execution for assaulting a prison guard while serving a life sentence. Wells was granted clemency by California Governor Goodwin J. Knight in 1954.

Branton helped in the defense of 14 members of the California Communist Party accused of conspiring to overthrow the Federal government. The defendants were convicted in Los Angeles in 1952. Four years later, Branton and other attorneys won a reversal of the convictions from the U. S. Supreme Court.

Entertainment practice was another part of Branton’s legal work. Among his celebrity clients in the 1950s were singer Nat King Cole and actress Dorothy Dandridge. Later in his career, he represented comedian and actor Richard Pryor and jazz composer and musician Miles Davis.

During the 1960s, Branton traveled many times to the South, lending his legal skills to civil rights cases. He also defended members of the Los Angeles chapter of the Black Panther Party against an unlawful attack by the Los Angeles police in 1969.

In 1972, Branton won national attention as co-defense attorney for black communist activist Angela Davis, a former philosophy professor at the University of California at Los Angeles. She faced the death penalty when a gun registered in her name was linked to the killing of a judge in Marin County, California. Branton persuaded the all-white jury to acquit Davis.

The City of Los Angeles, the California State Senate, and the National Association for the Advancement of Colored People (NAACP) gave awards to Branton for his exemplary work. In 1979, the Brotherhood Crusade named him one of the Pioneers of Black Legal Leadership in fighting for equal justice under the law.

Branton continued his law practice for many years, often lending pro bono services to people in need.  The NAACP honored him in 2011 for the financial sacrifice he endured in taking cases involving working class and indigent clients.

Leo Branton died of natural causes in Los Angeles on April 19, 2013, at the age of 91. He was survived by three sons.