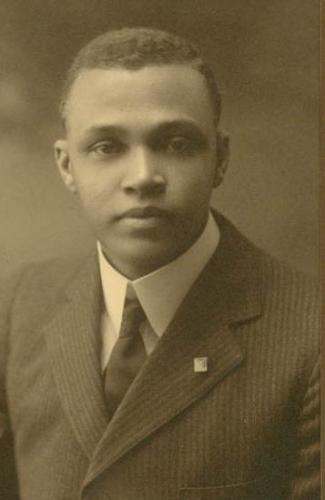 Born in Louisville, Kentucky in 1884, Saint Elmo Brady became the first African American to earn a Ph.D. in the field of chemistry when he completed his graduate studies at the University of Illinois in 1916. The eldest child of Thomas and Celesta Brady, Saint Elmo had two younger sisters, Fedora and Buszeder.

Brady studied chemistry at Fisk University in Nashville, Tennessee and earned his B.S. degree in 1908. After graduation he accepted a faculty position at Tuskegee Normal and Industrial Institute (now known as Tuskegee University) and was mentored by George Washington Carver and Booker T. Washington, President of Tuskegee. He began graduate studies in the Department of Chemistry at the University of Illinois in 1912, earning his M.S. degree in 1914 and completing his doctorate in 1916. As a graduate student at Illinois, Brady’s research focused on the characterization of organic acids. Brady eventually published three abstracts focused on his graduate work in Science, a prestigious peer-reviewed journal.

After completing his doctorate, Brady returned to Tuskegee and continued teaching until 1920. He also served as chair and faculty of the Department of Chemistry at Howard University and Fisk University. Regarding his scholarly achievements, Brady continued collaborative work with the University of Illinois and established a faculty training program focusing on a technique known as infrared spectroscopy, which is used to identify various components in compounds. Moreover, he later published an article focused on the synthesis of a halogen compound with Dr. Samuel Massie, the first African American to join the faculty at the U.S. Naval Academy. Brady’s work was important because there was significant interest in halogen compounds being used as insecticides at that time.

Samuel Massie, who went on to work on the Manhattan Project in World War II, was one of several students that Brady mentored while teaching at Fisk University, thus encouraging African Americans to pursue careers in the chemical sciences. Although Brady officially retired from teaching in 1952, he took a position at Tougaloo College outside Jackson, Mississippi to help develop the chemistry department and recruit faculty.

Brady married Myrtle Travers and they had two sons, Robert and St. Elmo Brady, Jr. who worked as a physician. He was also a member of Sigma Pi Phi fraternity. St. Elmo Brady died on Christmas Day in 1966 Washington, D.C. He was 82.