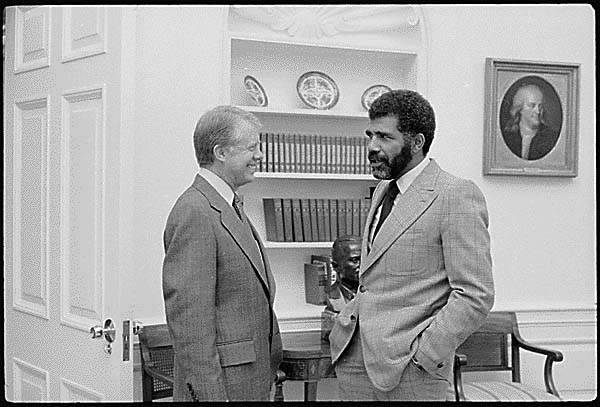 Edward Rudolph Bradley Jr., journalist, was born June 22, 1941, in Philadelphia.  His father was a businessman and his mother a housewife.  After Bradley’s parents divorced, he spent summers with his father in Detroit.  He attended primary and secondary school in Philadelphia.  In 1960 he attended Cheyney University of Pennsylvania and played defensive end and offensive tackle on the football team.  After earning a degree in 1964 in education, Bradley taught sixth grade. He also worked nights at WDAS-FM radio in Philadelphia as a jazz disc jockey and basketball play-by-play announcer.

In 1976 Bradley was the first African American reporter at CBS to serve as a White House correspondent and anchor the station’s Sunday evening news program. In 1978 Bradley became a correspondent for “CBS Reports,” reporting from Cambodia, China, Malaysia, and Saudi Arabia.

His “firsts” continued into the next decade.  In 1981, Bradley became the first African American reporter on the popular television news magazine, 60 Minutes.  He covered such subjects as the Emmett Till murder case, AIDS in Africa, and the Duke University rape case. Bradley’s most high profiled interviews included Muhammad Ali, Michael Jackson, Tiger Woods, and Lena Horne. During his lifetime, Bradley received numerous awards and honors.  He won 19 Emmy awards, including one in 2003 for lifetime achievement.  In 2005, the National Association of Black Journalists presented Bradley with its lifetime achievement award.

On November 9, 2006, Ed Bradley died at the age of 65 at Mount Sinai Medical Center in New York City of complications from chronic lymphocytic leukemia.  Bradley is survived by his third wife, Patricia Blanchet.