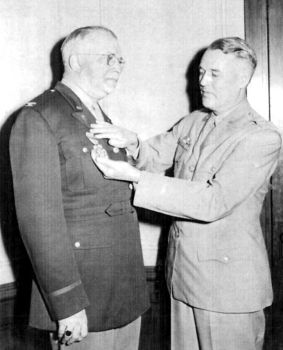 Physician and businessman Dr. Midian Othello Bousfield was a leader in Chicago’s insurance industry. His diverse career included work in medicine and in the military, advocating for African American health care and for the training of black medical personnel. He was the first black person promoted to the rank of colonel in the Army Medical Corps while commanding the Army’s all-African American hospital, an appointment that was marred by controversy amid criticism that he was contributing to segregationist policies.

Bousfield was born on August 22, 1885 in Tipton, Missouri to Willard Hayman Bousfield, a barber and businessman, and Cornelia Catherine Gilbert Bousfield. The family moved to Kansas City, Missouri, and after high school Midian Bousfield graduated from the University of Kansas in 1907 with a bachelor of arts degree. He then entered medical school at Northwestern University in Chicago where he earned an M.D. in 1909. The following year Bousfield began working as an intern at Howard University’s Freedman’s Hospital in Washington, D.C. and then worked briefly in Kansas City.

In 1914 he met and married Maudelle Tanner Brown, a public school teacher from St. Louis. The couple moved to Chicago where Midian Bousfield accepted a job as secretary of the Railway Men’s International Benevolent Association, an African American railroad union that later became the Brotherhood of Sleeping Car Porters. After the birth of their daughter, his wife Maudelle taught in the Chicago Public Schools and became its first African American principal in 1928.

Bousfield spent much of the remainder of his career developing and improving health care and medical training opportunities for African Americans. As director of Negro Health Division for the Julius Rosenwald Fund, he helped finance the education of numerous future black physicians and nurses. Bousfield also was responsible for developing the Infantile Paralysis Unit at Tuskegee Institute and a similar facility at Provident Hospital in Chicago. From 1933 to 1934 he was president of the National Medical Association (NMA), an organization of black physicians across the nation. In 1939 Bousfield was appointed the first African American member of the Chicago Board of Education.

Three years later in 1942 Bousfield was selected to command the U.S Army’s Station Hospital, the first all-African American hospital in Fort Huachuca, Arizona. The hospital served the 14,000 black women and men stationed at the fort in training for combat in World War II. However, the National Medical Association considered the hospital to be segregationist, and the NMA censured its former president for contributing to separatist policies. Nonetheless, Bousfield earned the rank of Lieutenant Colonel and retired in 1945 as the Medical Corp’s first African American colonel.

Midian Othello Bousfield, a member of Sigma Pi Phi Fraternity, returned to Chicago where he died of acute coronary disease at his home on February 16, 1948.  He was 62.