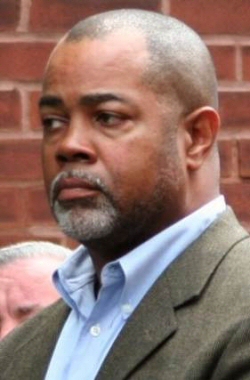 Freeman Roberson Bosley, Jr., is the first African American Mayor of St. Louis, Missouri.  Bosley was born in St. Louis on July 20, 1954, the son of Freeman Roberson and Marjorie Bosley.  His father, a long-time alderman in St. Louis, unsuccessfully ran for mayor in 1985.  Bosley received a Bachelor of Arts in Urban Affairs in 1976 and a Juris Doctor (law) degree in 1979 from St. Louis University.  Active in politics as both an undergraduate and a law student, Bosley served as the clerk of the Circuit Courts for eleven years, beginning in 1982, and was the city of St. Louis’s Democratic Party chairman from 1991 to 1993.

In 1993, at the age of 38, Bosley, a Democrat, was elected mayor defeating a relatively unknown Republican, John Gorman, and two independent candidates by winning 67 percent of the vote.  He won the Democratic primary over frontrunner Thomas Villa and his 1 million dollar campaign war chest by going door-to-door in African American, white, and racially-mixed neighborhoods accompanied by his wife and their two-year-old daughter.  His platform promoted racial harmony, reduced crime, and improved public schools.  He also proposed to allocate more funds for neighborhood redevelopment.

Shortly after assuming office, Bosley announced his intention to lobby for an end to St. Louis’s ten-year-old school desegregation program.  The program bused about 14,500 African American students to predominantly white schools in St. Louis County, although 47 of the city’s 106 school districts were still virtually African American.  While appreciating the need for school desegregation, Bosley believed the program had hurt the city by encouraging parents to leave the city.  Bosley preferred to use the federal money the city received to upgrade schools in all of the city’s neighborhoods.  Also during Bosley’s first year in office, the city’s South Side was threatened by flood waters.  Although the city reported hundreds of thousands of dollars in property damages, Bosley’s initially controversial order to shut off power and evacuate homes ultimately helped to protect residents’ lives. Bosley also led the effort to relocate the Los Angeles Rams (California) football team to St. Louis.

In 1994, Bosley named a lesbian to the city’s Civil Rights Commission, giving the gay and lesbian community a voice on the 15-member board for the first time.  He also banned gun shows in the city, saying they were inappropriate at a time when the city’s murder rate was rising.  Bosley served as co-chairman of the Hunger and Homelessness Task Force of the U.S. Conference of Mayors.