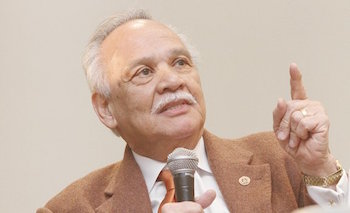 Prominent Virginia journalist Ray Boone Sr. was born February 2, 1938, in Suffolk, Virginia.  His parents, foreign-born Japanese father, Tsujiro Miyanski, and mother, Leathia M. Boone, of mixed African and Native American descent, were banned from marrying in Virginia because of their different races. Yet they remained together, running a successful Asian-Soul Food restaurant until 1943.

Inspired by his parents’ belief that education crushed barriers of bigotry, and by a teacher who told him he wrote well, Boone won a county-wide poetry contest. Soon afterward, he started East Suffolk High School’s first newspaper and while there also wrote human interest stories in the “colored section” of a white daily newspaper, his hometown Suffolk News-Herald.

After completing high school in 1955, Boone worked his way through college, reporting for the Norfolk Journal and Guide, as well the Suffolk News-Herald, before transferring to Boston University in Massachusetts where he worked as a reporter for the Quincy Patriot Ledger. He graduated with a bachelor’s degree in journalism in 1959 and worked in public relations at Tuskegee University in Alabama before being drafted into the U.S. Army. Following his military service, Boone became the White House Reporter for the Afro-American newspaper chain in Baltimore, Maryland, at the height of the Civil Rights Movement.

In 1965, the editors at the Afro-American tapped 27-year-old Boone as editor of the newspaper’s subsidiary, the Richmond Afro-American. While there he covered the later years of the civil rights movement which saw the emergence of new African American leaders such as Lawrence Douglas Wilder, a future governor of the state, and Henry L. Marsh III, a future State Senator and eventual Mayor of Richmond.  In 1969 Boone organized the Frederick Douglass Fellowships which helped initiate the careers of young African American journalists such as Jack White, who joined Time magazine as the first African American staff-writer in 1972 and who later became its senior editor.

By 1976 Boone had become editor and vice-president of the entire Afro-American newspaper chain, a position he held until 1981. Between 1978 and 1979, he led a nationwide effort to name minority journalists to the Pulitzer Prize Board at Columbia University. Between 1981 and 1990, he taught journalism at Howard University in Washington, D.C. while simultaneously earning a Master’s in Political Science. During this period, he also served as international correspondent for the National Newspaper Publishers Association (NNPA), reporting from Germany, Finland, the Soviet Union, Israel, and Cuba.

Boone founded Paradigm Communications, Inc. in 1991, and the following year his company launched the Richmond Free Press. For the next twenty-two years, his robust reporting and stinging editorials spared no one in his relentless pursuits for racial justice. Black Enterprise Magazine termed his journalistic style a model for the survival of struggling black newspapers. Time magazine credited him with reinvigorating the black press. For his leadership at the Richmond Free Press, Boone won numerous awards and recognitions including his induction into the Virginia Communications Hall of Fame in 2000. He received the Virginia NAACP’s highest honor, the Oliver W. Hill Freedom Fighter Award, in 2006.

On June 3, 2014, Raymond Harold Boone died at his home in Richmond from pancreatic cancer.  He was seventy-six. He was survived by his widow, Jean Patterson Boone, who became president of the Richmond Free Press; a son, Raymond H. Boone Jr., who serves as vice president of the newspaper; and a daughter, Regina H. Boone, who is a photographer with the Detroit Free Press in Michigan.