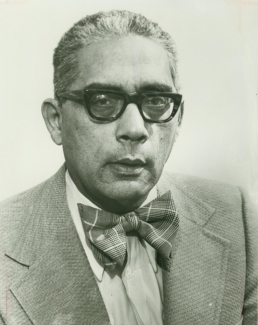 Simeon Saunders Booker Jr.’s innovative career in journalism transformed how African American readers engaged with news coverage of politics and social injustices. As the first African American reporter for the Washington Post, he provided insight into the Civil Rights Movement in the 1960s.

On August 27, 1918 in Baltimore, Maryland, Booker was born to Simeon Saunders Sr. and Roberta Waring Booker as the second of four children. At the age of five, his family resettled in Youngstown, Ohio where his father opened the first YMCA for African Americans in the city. Despite his father’s hopes that he would one day become a Baptist minister, Booker’s passion for deconstructing racism in the United States propelled him into journalism and activism.

Booker’s path through higher education began at Youngstown College. After learning about the institution’s discriminatory practices, he transferred to Virginia Union University where he graduated with a degree in English in 1942. Soon after, Booker returned to Baltimore and began writing for African American newspapers in that city and Cleveland while working for Ebony magazine. Booker’s early successes in the field of journalism led him to become the second African American after Fletcher P. Martin to earn the Nieman Fellowship to study at Harvard University in 1950.

Although Booker’s employment at the Washington Post from 1952 to 1954 was groundbreaking, he was displeased with being assigned to cover only general news. By leaving the Post and becoming Jet’s chief columnist, Booker was finally granted the platform to freely provide critical analysis of the Civil Rights Movement.

After the murder of 14-year-old Emmett Till in Mississippi, Booker accompanied Mamie Till, to the viewing of the body. It was Booker who insisted that the photos of Till’s open-casket be published in Jet while others were hesitant. The photos, along with Booker’s narrative of the tragedy, were published in the September 1955 edition of the magazine, inspiring thousands of people, including Rosa Parks, to take immediate action.

Booker’s reporting on Till’s murder, the Freedom Rides, and many other pivotal moments in civil rights history guided him towards becoming the second African American reporter, after Harry S. McAlpin, to gain White House press credentials.

Concluding 65 years in journalism, Booker retired from Jet’s Washington Bureau chief position in 2007. Following his first book, Black Man’s America, in 1964, he published his memoir, Shocking the Conscience: A Reporter’s Account of the Civil Rights Movement in 2013.

Throughout his pioneering career, Booker received many prestigious acknowledgments for his lifetime achievements. He was inducted into the National Association of Black Journalists’ Hall of Fame in 2013 and received the George Polk Career Award from Long Island University in 2016. In 2017, members of the U.S. House of Representatives nominated Booker for a Congressional Gold Medal and the Presidential Medal of Freedom, the nation’s highest civilian honor.

On December 10, 2017, Booker passed away in due to pneumonia-related problems in Solomons, Maryland. He is survived by his wife, his sons, Simeon III and Theodore, and his daughter, Therera.