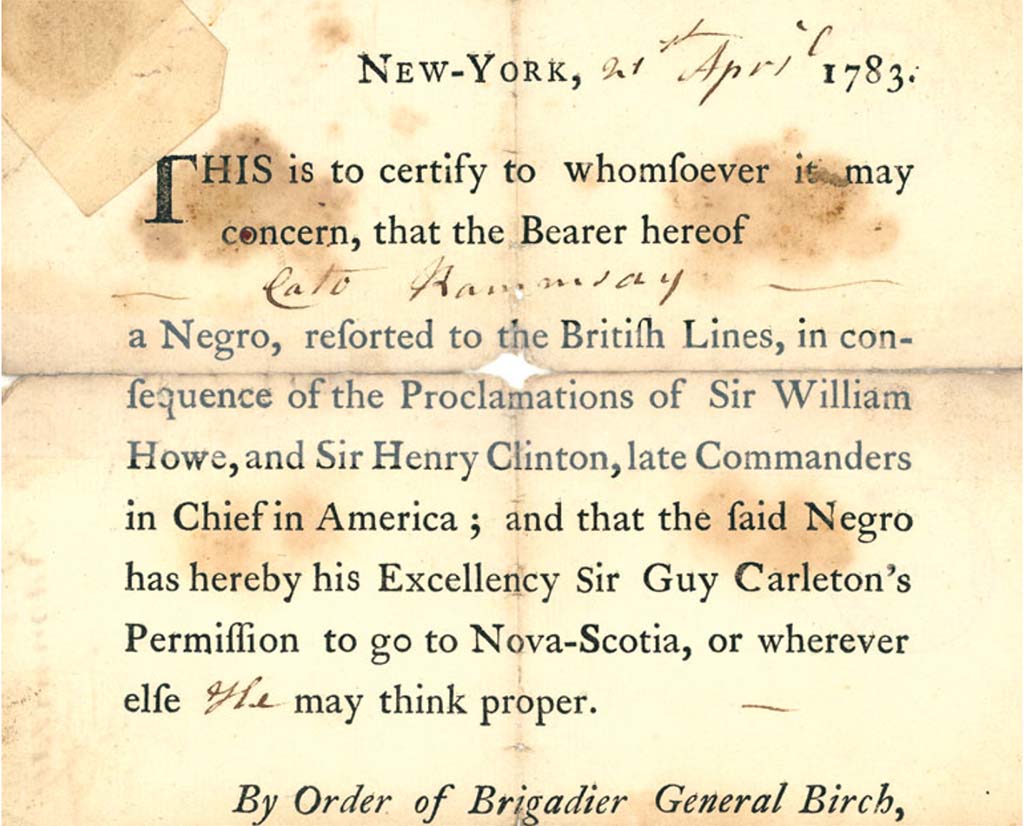 “The Book of Negroes” is a series of documents listing persons of African ancestry who were evacuated from the United States at the end of the American Revolution.  One copy is held with the Guy Carlton Papers in The National Archives of Great Britain in London, England. The second copy, titled “Inspection Roll of Negroes New York, New York City Book No. 1 April 23-September 13, 1783,” is held in the United States National Archives in Washington, D.C. These rolls were compiled over a six month period by a group of British and American representatives who convened each Wednesday from April to September, 1783 at the Queens Head Tavern owned by Samuel Fraunces, a free black resident of New York who was born in St. Catherine’s, Jamaica.

The Book of Negroes was completed prior to November 25, 1783, which was designated as the date the British Army and Loyalists (pro-British residents of New York and other colonies) would depart for Canada.  American slaveholders wanted to take possession of their human property who had fled to the British and whom they believed were promised to be repatriated by the Paris Peace Treaty of November 1782, which recognized American independence and officially ended the fighting between British and American forces.  Sir Guy Carlton, the British commander in charge of the negotiations, however vowed that he would not surrender human property stating it was “A dishonorable violation of public faith.” Carlton proposed instead to compensate slave owners for their loss of property but no known compensation was made by Great Britain.

Samuel Jones, who later became comptroller for New York State, signed the documents on behalf of the United States. Signing for Loyalists were W.L. Smith, a future Chief Justice of the Canadian Supreme Court, along with Lt. Colonel Richard Armstrong of the Queen’s Rangers and Lt. Alexander McMillin of  DeLancy’s 1st battalion.  Armstrong and McMillan settled in New Brunswick along with many black Loyalists.

The Book of Negroes, a document of over 200 pages, consisted of a ledger of individuals and where possible, short accounts of individual lives which included country of origin, free or enslaved status, dates, indentures, owners, status of owners (whether they were Loyalists or Patriots), descriptions of appearance, parents, race, and age. The informants included slave owners wanting compensation for runaways, military officers in command of black Loyalist regiments, civilian Loyalists, and those with freedom papers.

It is estimated that about 3,500 free black Loyalists left New York City with the total group of 35,000 bound for New Brunswick, Nova Scotia, and Prince Edward Island. There were also approximately 1,500 enslaved individuals who belonged to slaveholding Loyalists.  Thus persons of African ancestry comprised nearly 15 percent of the Loyalist exodus to Canada.