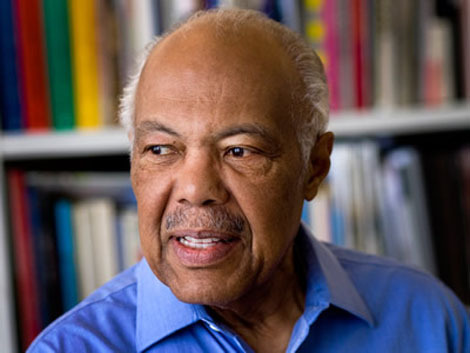 J. Max Bond, Jr. was a prominent African American architect.  He was born in 1935 into a prominent intellectual family from Louisville, Kentucky. His father, J. Max Bond, Sr., who held doctorate degrees in economics and sociology from the University of Southern California, was a prominent academic administrator who was once president of the University of Liberia.  His mother, Ruth Clement Bond, taught literature while his cousin, Julian Bond, is chairman of the National Association for the Advancement of Colored People (NAACP).

J. Max Bond, Jr., was educated at Harvard where he studied architecture, receiving his BA degree in 1955 and his MA degree in 1958 from the Harvard Graduate School of Design. Despite his academic background he experienced racism in the elite academic and professional circles in which he moved and often spoke out against it.  He displayed an early interest in architecture, but was discouraged by Harvard advisors from focusing on the field because there were virtually no famous African American architects for him to emulate.  He pursued the field anyway and developed an early interest in North African architecture.

In 1958 Bond received a Fulbright to study architecture in France and worked under the direction of famous architect André Wogenscky. Unable to find work in any American architectural firms due to his race, he turned his direction overseas.  Bond lived and worked in Ghana in the 1960s, designing several buildings. While in Ghana, he taught at Ghana University of Science and Technology.  He also traveled to Tunisia where he had the chance to study North African architectural designs.  In 1969, Bond returned to the United States and moved to New York City where he established the architecture firm of Bond, Ryder, and Associates which eventually became the most successful African American architectural firm in the nation.

Bond’s work was a breathtaking and eclectic blend of a variety of styles.  Some of his major projects included the Civil Rights Museum in Birmingham, the Martin Luther King Jr. Center for Social Change and Memorial in Atlanta, the Schomburg Center for Research in Black Culture in Harlem, and the Studio Museum in Harlem. His other work included plans for the National University of Science and Technology in Zimbabwe, as well as the Munto Dance Theater in Chicago.  He helped to establish the Architect’s Renewal Committee of Harlem and served on its leadership team.  Bond was selected to spearhead the museum portion of the 9/11 memorial project.

Bond taught in several academic venues, including Columbia University and City College of New York.  He received numerous awards, acknowledgements, and honorary degrees throughout his life.  His interest always included encouraging students of color in pursuing architecture and breaking down professional and academic barriers.