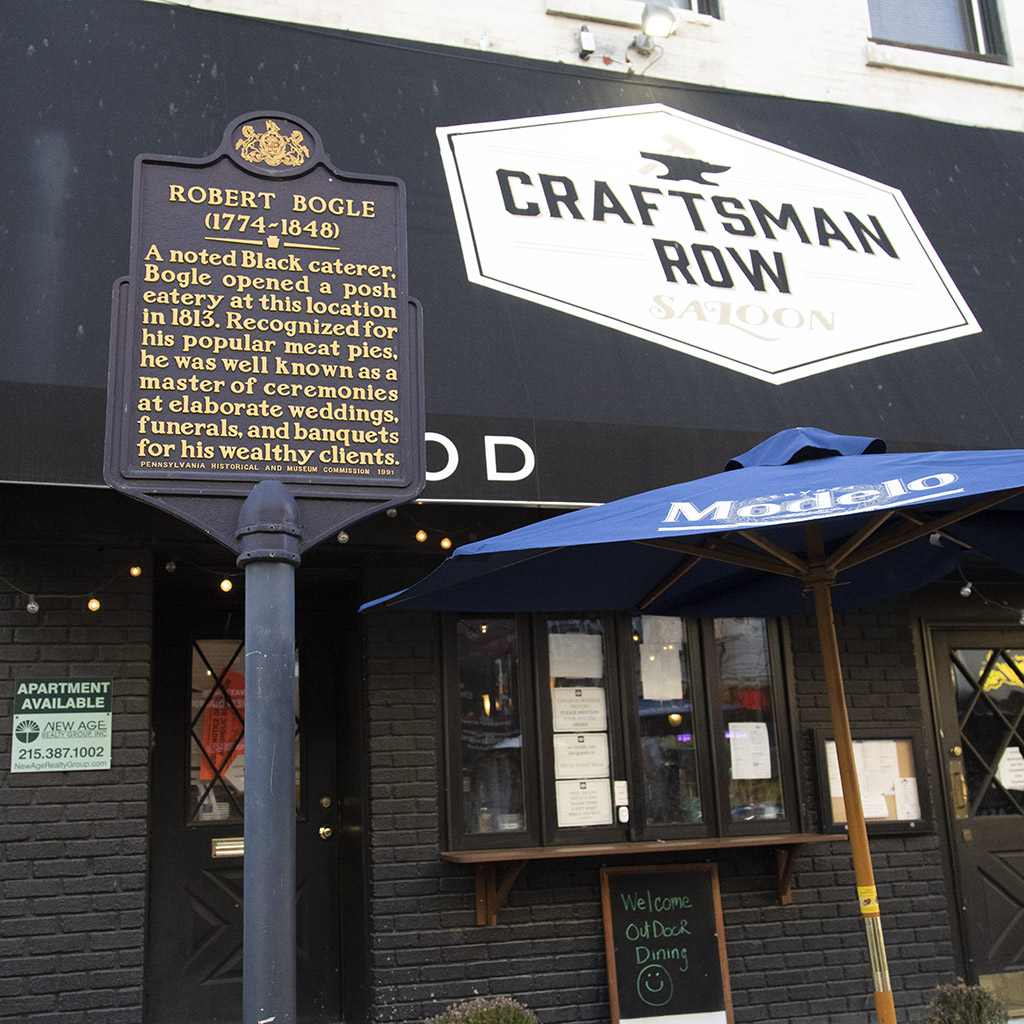 Entrepreneur Robert Bogle was the first of many African American caterers who served nineteenth-century Philadelphia’s white elite. Born in 1774, the 1810 federal census shows Bogle and five members of his family in Philadelphia’s South Ward, where the majority of the city’s African American residents lived.  The censuses of 1820 and 1830 record that the Bogles remained in the South Ward as their family increased. A successful businessman, Bogle died in 1848, remembered by prominent citizens in verse and memoir as an essential presence at all of life’s main events, from christenings to funerals.

Robert Bogle established his shop at 46 South Eighth Street in 1812 and is credited with having “virtually created the business of catering” in Philadelphia by W.E.B. DuBois, although the term “caterer” was not used until the 1860s.  In the mid-nineteenth century, the growing African American population of Philadelphia was facing competition from Irish immigrants for service sector jobs.  Philadelphia was rocked by race riots in the 1820s, 1830s, and 1840s.  Catering and other food trades offered African Americans the opportunity to own their own businesses with little competition from whites.  African American catering companies played a prominent role in Philadelphia’s social life for more than 150 years, from Bogle’s early-nineteenth-century establishment until Albert E. Dutrieulle Catering closed in 1967.

In addition to catering, Robert Bogle ran a funeral business for the social elite.  “Ode to Bogle,” a light poem written in 1829 by prominent Philadelphia banker Nicholas Biddle (1786-1844), describes Bogle as an important contributor to any social event.  “Thy reign,” the verse explains, “begins before our earliest breath, nor ceases with the hour of death.”  The poem describes the caterer as a calm, unruffled administrator of sweet treats and funeral processions, a “Colourless colored man, whose brow; Unmoved, the joys of life surveys; Untouched the gloom of death displays.”

Robert Bogle died in Philadelphia in 1848.