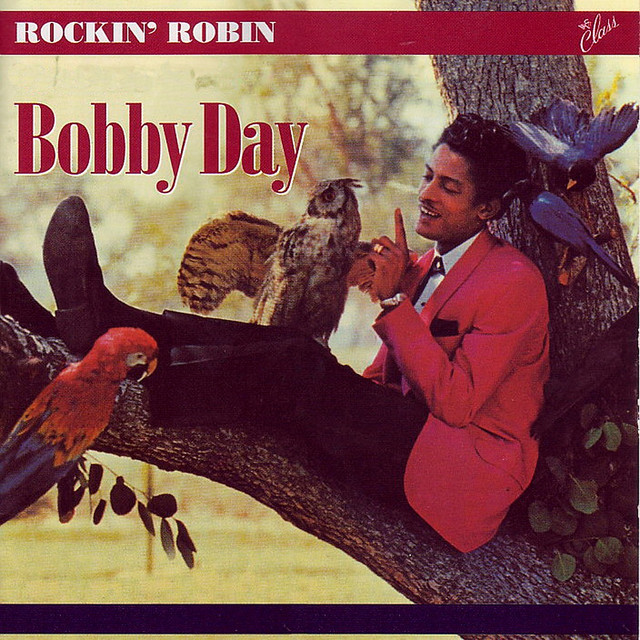 Rock and Roll and R&B singer and songwriter Bobby Day was best known for his only major hit “Rockin’ Robin” recorded in 1957 on the Classic Label. In 1958, the single, written by Leon Rene under the pseudonym Jimmie Thomas, reached no. 1 on the R&B chart, no. 2 on the Billboard Hot 100 chart, and sold over one million copies. Day was a multi-instrumental artist, music producer, singer and songwriter.

Robert James Byrd was born July 1, 1930, in Fort Worth, Texas. HIs mother was Julie Jennings. He moved to Los Angeles at age 15 and began performing with the Hollywood Flames at the Otis’s Barrelhouse Club in Watts, Los Angeles. The club opened in 1948 and was co-owned by Johnny Otis, Bardu and Tila Ali.

In 1949 Day made his first recording, “Young Girl” with the Hollywood Flames on the Selective Label.  The song was released in 1950. Day had minor music success as lead singer of the Hollywood Flames during the 1950s, performing under the stage name of Bobby Day. Their hit song “Buzz, Buzz, Buzz” which he wrote, reached no. 11 on the R&B charts in 1957.  Day formed his own group, the Satellites, which backed him on “Little Bitty Pretty One” released in 1957.  From 1957 to 1959, Day and Earl Nelson performed as the duo Bob and Earl. In 1960, he and Earl recorded “Gee Whiz,” and in 1963, “Harlem Shuffle” under his real name, Robert Bryd. Thirty years later, House of Pain sampled parts of it in their hit single “Jump Around.”

Day appeared on several variety shows in the 1950s, 1960s and 1970s including American Bandstand and The Midnight Special. Both were live music variety shows featuring performances by popular artists, interviews of celebrity guests, and teenagers dancing.

Bobby Day died of prostate cancer at age 60 on July 27, 1990, in Los Angeles. He is survived by his wife Jackie and their four children.