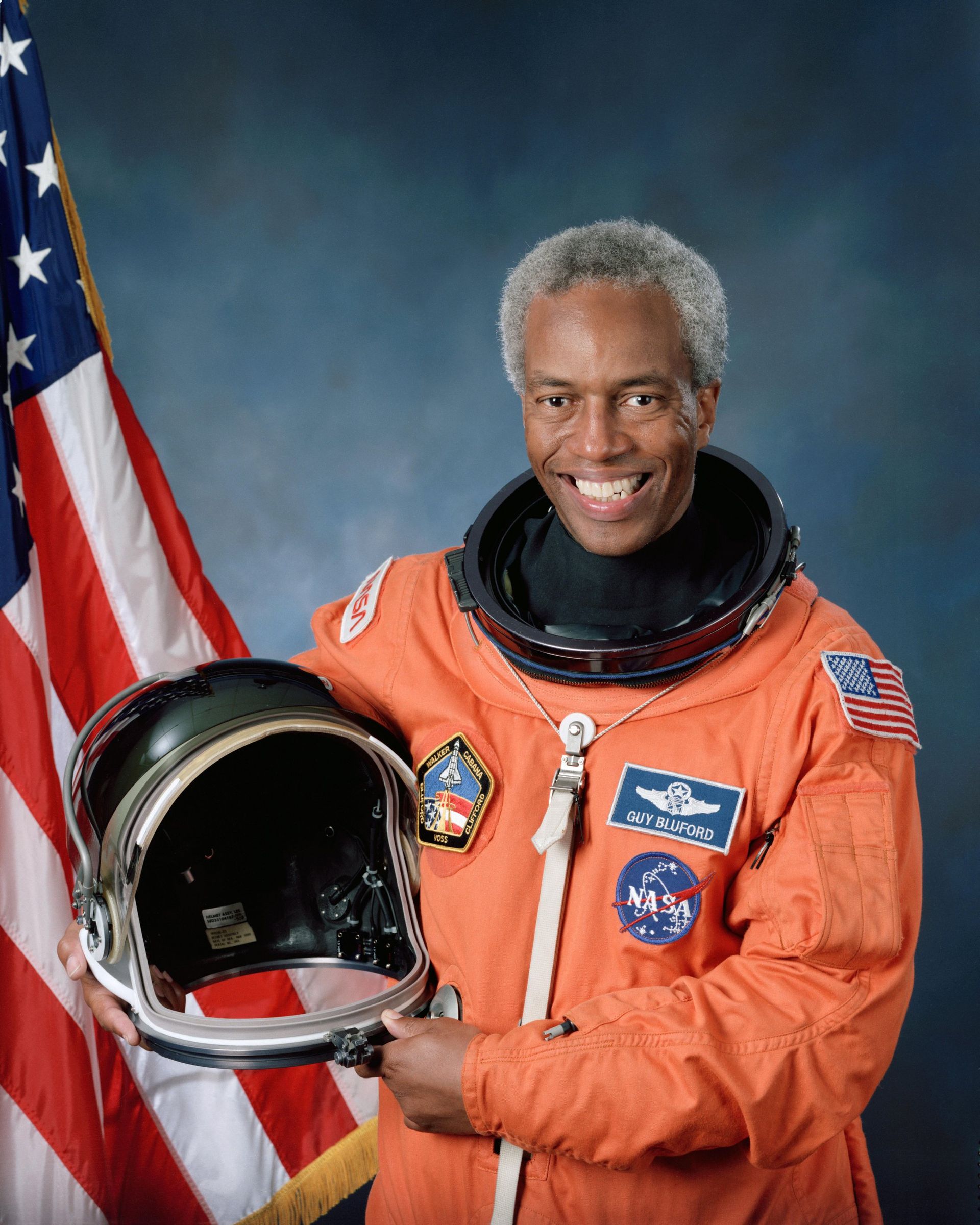 Guy Bluford, a member of the SDS-8 space shuttle Challenger crew in 1983, was the first African American in space. Born in Philadelphia, Pennsylvania, Bluford was interested in math and science and knew he wanted to work in aerospace engineering before graduating high school. His high school counselor suggested that college was not for him. Refusing the advice, Bluford became the only black engineering student at Pennsylvania State University in 1960. Undaunted, he graduated with a degree in aerospace engineering in 1964 and went through pilot training at Williams Air Force Base in Arizona where he received his pilot wings one year later. Before being sent to Vietnam in 1967, Bluford felt the sting of racial discrimination when his family was denied housing on base. He flew 144 combat missions with the 557th Squadron in Vietnam.

After serving his tour of duty in Vietnam, Bluford worked as a flight instructor at Sheppard Air Force Base in Texas and started graduate studies at the Air Force Institute of Technology in 1972. He received a M.S. in aerospace engineering in 1974 and a Ph.D. in 1978. The same year, he was one of the thirty-five selected for the National Aeronautics and Space Administration (NASA) astronaut training program out of 10,000 applicants.

On August 30, 1983, over a million people and more than 250 famous black educators and professionals including Dr. Dorothy Irene Height, President of the National Council of Negro Women, and C. Alfred Anderson who trained many of the Tuskegee Airmen, watched Bluford blast off into space. He flew the space shuttle, conducted experiments and helped launch a $45 million satellite to provide communications and weather information for India. President Ronald Reagan called the space shuttle during their mission and told Bluford “You will serve as a role model for so many others and be so inspirational.”

Bluford flew a total of four missions in space and continued with NASA until 1993. He received an M.B.A. from the University of Houston while still serving in 1987, and became the Vice President of a computer software company in Maryland after retiring. Bluford broke the color line of space. In less than five months after his first launch in 1983, Ronald E. McNair would be the second African American in space and by 1992 Mae Jemison would be the first African American female in space.