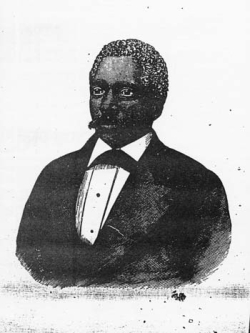 Norvel Blair was born into slavery in 1825 in Montgomery County, Tennessee. He is best known as the author of a political tract and autobiography in 1880, Book for the People! To Be Read by All Voters, Black and White, with Thrilling Events of the Life of Norvel Blair, and as the founder of the “Sully County Colored Colony” in South Dakota Territory in 1884.

Norvel was the son of Norvill and Lucy Blair who were enslaved by the Keteral family in Montgomery County. At the age of eight, he was sold away from his parents, then sold again to a family in Indian Territory where he married fellow slave Mary Elizabeth Bagby. After the Civil War, he and his wife reunited seven of their 12 children and his parents in Grundy County, Illinois. The family accumulated land and wealth but were robbed and their home riddled with bullets by an unidentified mob in 1880. Soon afterward his attorney and a judge swindled him out of some property. When Blair tried to vote for a Democratic candidate in the next election, partly because those who swindled him were prominent Republicans, he was barred from the polling place.  Fed up with Grundy County, Illinois, he decided to move his family to the West.

Blair and four of his children filed homestead claims in Sully County, South Dakota, on the east bank of the Missouri River. The Blair family purchased properties abandoned by people who moved on after the gold rush in the Black Hills fizzled. His daughter, Betty Blair, became a realtor and sold farms to other African Americans seeking to leave the south. Eventually, almost 200 people of African descent farmed in the area.

Blair raised racing horses on his homestead, including the famous Johnny Bee that was the fastest horse in South Dakota for several years.

Norvel and Mary’s sons, Benjamin and Patrick, operated a livery in Fairbank, South Dakota. In 1896 Benjamin became the first African American to serve on a school board in South Dakota, holding the post of chairman of the Fairbank school district for ten years. One daughter, Nancy, married the Rev. Cornelius Wright, a minister of the Methodist Episcopal Church. Daughters Winnie and Betty operated a restaurant and bakery in Pierre, South Dakota, and their son, John, worked as a Pullman porter.  In 1894 he received special recognition from the St. Paul and Duluth Railroad for saving a number of passengers during a train fire.

Norvel Blair died on his homestead near Fairbank, South Dakota on October 7, 1916. He and his wife and several of their children are buried in a private family cemetery at the Blair homestead.