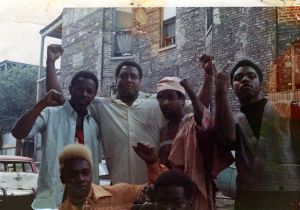 The Blackstone Rangers are a street gang formed in the late 1950s on Blackstone Street on the south side of Chicago, Illinois. The Blackstone Rangers were founded by two teenagers, Jeff Fort and Eugene Hairston, while they were at the Illinois School for Boys in St. Charles. In its earliest days the Rangers were mostly local neighborhood kids who banded together for protection against other rival gangs. Their intentions, however, began to expand as the gang turned to profitable criminal activity. By 1965, the Blackstone Rangers ballooned to 5,000 members.  In that same year, Reverend John Fry helped the gang apply and receive a charter from the state of Illinois to create a political organization named “The Grassroots Independent Voters of Illinois.” Under this charter, the Blackstone Rangers received a $1 million dollar grant from the U. S. government under the false pretense of creating a jobs training program. All of the money went toward funding criminal activity.

In 1966 the leaders of the Rangers mobilized rival gangs and created the Black Peace Stone Nation (Black P. Stone/BPSN), an amalgamation of 21 smaller diverse groups. The ruling power of the organization continued to lay with Jeff Fort and Eugene Hairston. By 1968, however, the gang began to draw the attention of U.S. prosecutors over fraudulent use of federal funds earmarked for the training program. After a four-year investigation, gang leaders Fort and Hairston as well as others key members of the BPSN were convicted and sentenced to federal prison. While there, Hairston and Fort began a power struggle for leadership of the gang which now had over 50,000 members, at the time the largest street gang in the United States. Fort won the struggle. Hairston left the BPSN and led dissident members who set up smaller rival gangs such at the Titanic Stones.

By the time of his release in March of 1976, Fort had converted to Islam, adopting the name Abdullah-Malik.  He also changed the gang’s name to El Rukn (Arabic for “foundation of knowledge”).  Behind the cover of this new Islamic image, the gang turned its activities to drug trafficking. In 1986 the El Rukn members became involved with Libyans and agreed to carry out terrorist attacks in the United States in exchange for $2.5 million dollars. When members of El Rukn attempted to buy high powered weapons from an undercover FBI agent posing as an arms dealer, Abdullah-Malik was arrested and sentenced to 80 years in prison where once again he led the gang from behind bars. The El Rukn no longer have a street presence in Chicago and exist primarily as the Masjid Al Kabah, a religious-political group under Abdullah-Malik. Various factions of the old BSPN continue to operate in Chicago and its suburbs as well as in southern and east coast cities.