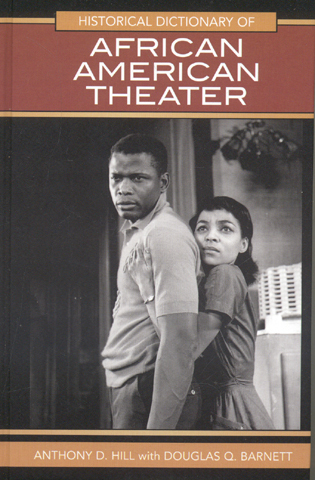 In the following account the authors Anthony D. Hill, associate professor of drama at The Ohio State University, and Douglas Q. Barnett, director, producer, and founder of Black Arts/West in Seattle, discuss why they created the Historical Dictionary of African American Theater, the first comprehensive compendium of two centuries of blacks on stage.

African American Theatre is a vibrant and unique entity enriched by ancient Egyptian rituals, West African folklore, and European theatrical practices. A continuum of African folk traditions, this theatre combines storytelling, mythology, rituals, music, song, and dance with ancestor worship from ancient times to the present. It has afforded black artists a cultural gold mine to celebrate what it has been like to be an African American in The New World.

Black theatre boasts award-winning playwrights, actors, directors, choreographers, designers, and theatre companies. It refined and redefined the popular minstrel tradition-America’s first pure form of entertainment. It helped to originate and shape America’s musical comedy format. It brought to the American stage a rich theatrical history and cultural practice, and captivated American as well as European audiences with its Charleston dance craze and rhythms. Due to social restrictions that created major barriers to its development, it took the fledgling African American theatre a few centuries longer to find its place within American theatre and popular entertainment.

Douglas Q. Barnett and I, both African American theatre practitioners from Seattle, Washington, were well aware of this rich black theatrical history but felt it was not easily accessible to the theatre community or the general public. We were also aware that there had been few directories or dictionaries about African American Theatre other than those written by noted theatre historians such as Henry T. Sampson, Bernard L. Peterson, Jr., and James V. Hatch that examine black theatre during the first half of the twentieth century. Sampson’s The Ghost Walks is a chronology of the history of blacks in show business between 1865 and 1910. Peterson produced three dictionaries on early aspects of black theatre. The first described black theatre organizations, companies, theatres, and performing groups; the second discussed early black American playwrights and dramatic writers; and the third profiled performers and theatre people. In addition, Professor Hatch and Edward Mapp expanded their study on black theatre to the late 1970s. Hatch’s Black Playwrights, 1823-1977, is an annotated bibliography of plays, and Mapp’s Directory of Blacks in the Performing Arts, which describes individual performers, ends in 1978. The works by Allen Woll, and Bernard L. Peterson, Jr., are more current directories on black show business. While all these works have merit, they concentrate on specific aspects of black theatre. The focus of Woll’s Dictionary of the Black Theatre, for example, is On-and-Off-Broadway, and selected Harlem Theatre up to 1983; however, it does not cover theatres outside New York City. Peterson’s Black American Playwrights and Their Plays is also singularly focused, and does not extend beyond 1988. The most recent study is Errol G. Hill and James V. Hatch’s History of African America Theatre (2003) which is also limited in scope and approach.

While these are significant and important works on aspects of African American theatre, there was no comprehensive dictionary of black theatre. We believe our Historical Dictionary of African American Theatre, which was released in December 2008, is the reference work that fills the much-needed void in examining past and contemporary black show business. The dictionary has over 600 selected entries which celebrate nearly 200 years of black theatre in the United States. It is a cross section of the thousands of black theatre artists across the country. It identifies representative African American theatre-producing organizations, playwrights, and selected works by these playwrights, actors, and directors. It also chronicles their contribution to the field from its birth in 1816 to the present. The dictionary includes the editor’s foreword, preface, acknowledgments, acronyms and abbreviations, chronology, introduction, dictionary, bibliography, and information about the writers.

To better acquaint the potential reading audience to the entries in this study we provided an historical overview in the preface entitled Black Theatre: from Birth to Rebirth, to Survival. As the overview explains, black theatre’s quest for legitimacy began by emulating mainstream American theatrical traditions at the African Grove in New York City in 1821 and in Minstrelsy before it stumbled, lost its way, and then found its own aesthetic. In 1856, William Wells Brown wrote the first known black play Escape; or, a Leap to Freedom. At the turn of the century, playwriting and performing artists such as Bert William and George Walker, and Bob Cole and J. Rosamond Johnson, wrote musical comedies that challenged the negative images of blacks in minstrelsy. In the 1920s, black theatre flourished during The Harlem Renaissance. Between 1935 and1939, the Negro Unit of the Federal Theatre Project made an impact on black theatre as did the American Negro Theatre with its social dramas and musicals of the 1940s, and the avant-garde and Off-Broadway movement of the 1950s. The second half of the 20th Century ushered in a new Renaissance with the Black Power Movement of the 1960s, the feminist movement of the 1970s, August Wilson’s 10-play cycle set for every decade of the 20th century, and with the array of plays presented at National Black Theatre Festival.

The black theatre movement, however, that started in the Civil Rights revolution during the middle of the 20th Century has, after a few faltering steps, regained its direction and has grown immeasurably. Theatre artists have founded their own theatres and companies, performed in black minstrel shows and musical comedies, and written protest, comedy, and folk plays. It has evolved into a theatrical tradition with a sense of pride, struggle, history, community, purpose, and achievement that has become a rich and vital entity with its own set of characteristics.

The authors hope this dictionary will be of value to librarians, teachers; high school, graduate and undergraduate students, theatre owners, performers, directors, dramaturges, theatre critics, historians, scholars, and all others in need of information on black theatre and black-authored plays. We hope it will lead to more detailed studies by researchers in the fields of black studies, literature and drama, and by playwrights, as well as producers, directors, actors, and theatrical organizations. It will be a valuable resource to serious theatre scholars all around the world.

Hill, A. (2009, April 22). The Black Presence in Theater through the Centuries in the Historical Dictionary of African American Theater. BlackPast.org. https://www.blackpast.org/african-american-history/black-thespians-through-centuries-historical-dictionary-african-american-theatre/