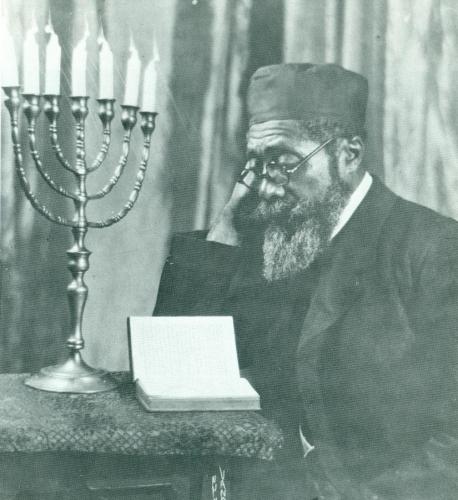 Rabbi Matthew, Founder of the Commandment Keepers of Harlem
Fair use image

The Black Jews of Harlem are a minority ethnic group in New York who first appeared in the early 1900s. By 1930 there were at least four groups of Black Jews in Harlem.  The most important of these groups was The Commandment Keepers Holy Church of the Living God.  Commandment Keepers’ founder, Rabbi Matthew, described the natural link between people of African descent and Judaism which he claimed extended from Abraham through King Solomon of Israel and Queen Sheba of Ethiopia who founded the line of kings who ruled Ethiopia.  He affirmed that the “original” Jews were black people, or at least people of  non-European descent who inhabited northeastern Africa and the Arabian peninsula. Yet, the Black Jews of Harlem were typically West Indian, East African, or South American in origin.

The specific origins of the Jewish faith among the blacks are obscure.  Some observers trace it to West Africa where a number of ethnic groups have customs so similar to Judaism that an ancient connection may have been established.  More recently Jewish slaveholders in the Carribbean may have influenced their bondspeople and in isolated situations such as intermarriage or conversions, thus introducing the faith to black West Indians.  These Black Jews and their descendants gradually embraced the Orthodox religious and cultural traditions most Jews see as common practice today.  By the 1930s Commandment Keepers observed all Jewish holidays, ate only kosher foods, performed bar mitzvahs and circumcisions, and separated men’s and women’s seats at the synagogue with a mechitza. Rabbi Matthew, who recognized that many Jewish traditions were European in origin, tried to incorporate African, Caribbean, and other American traditions into his community with little success.

The existence of the Black Jews of Harlem challenged prevailing ideas about race and religion during this period in which most observers considered blacks and Jews as separate racial categories.  Moreover, although most Jews had historically described themselves as a race, by the 1930s, many of the descendants of the 19th Century immigrants from Europe were beginning to claim “white status” and thus refused to accept “black” Jews. White Jews in Harlem often argued that being a Jew had many social and economic challenges of its own without the perceived potential challenge of being associated with black people in a society which embraced white supremacy.

The Black Jews of Harlem were and continue to be a relatively small sect.  They were typically poor, and maintained a very marginal status. Their existence consistently called into question the nature of Jewishness, as both white and black Jews defined the Black Jews groups differently, never finding consensus.