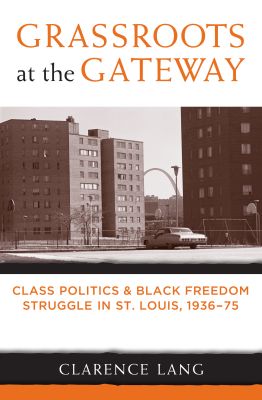 Grassroots at the Gateway: Class Politics and Black Freedom Struggle in St. Louis, 1936-75 (University of Michigan Press, 2009) by Clarence Lang
Fair use image

In the article below Clarence Lang, an associate professor of African and African American Studies at the University of Kansas describes his book, Grassroots at the Gateway which explores the changes in 20th Century St. Louis’s political, economic, and social landscape and how those changes both affected and were influence by local black activism.

Between the Great Depression of the 1930s and the end of the Great Society in the late 1960s, working-class African Americans led St. Louis, Missouri’s black community in a political “historic bloc” that pursued fair and full employment, economic justice, open and affordable housing, equitable health care and education, a racially democratic trade unionism, meaningful participation and representation in electoral politics, progressive urban development, and equitable planning and investment policies. I argue in my book, Grassroots at the Gateway: Class Politics and Black Freedom Struggle in St. Louis, 1936-75 that these battles generated both unity and conflict between black working-class and middle-class activists.

Grassroots at the Gateway employs the Gramscian concept of the “historic bloc,” which captures the dynamic alliances forged by working-class and middle-class African Americans to combat racial subordination, while also identifying the primacy of black working-class leadership in framing the issues these coalitions tackled.  Working-class freedom activists included individuals such as Cora Lewis, one of the thousands of black women nutpickers during the Depression who fought for better working conditions, pay, and union recognition, in the local food-processing industry; T.D. McNeal, local leader of the Brotherhood of Sleeping Car Porters and a founder of the militant St. Louis unit of the March on Washington Movement; Ernest Calloway, a leader of Local 688 of the International Brotherhood of Teamsters and once president of the St. Louis branch of the National Association for the Advancement of Colored People (NAACP); and Jean King, an organizer of the city’s historic 1969 public housing tenants strike.

Such working-class activists and their constituents were central in defining and directing black freedom struggles.  They led boycotts of neighborhood businesses refusing to hire black labor; fought for positions of ward-level political power; built mass support for industrial unionism; and contested their exclusion from the lily-white skilled building trades.  Some activists pursued the dream of self-determination through the formation of black working-class enclaves such as Kinloch, Missouri, and Black Nationalist organizations like the Pacific Movement of the Eastern World.  Others called for African Americans’ expanded access to federal social welfare benefits.  They protested segregated swimming pools and other leisure spaces, battled racism in education and employment, mobilized against the uprooting of working-class communities through urban renewal, and challenged the dislocating effects of capital flight and urban decline.

Their struggles helped achieve the building of black institutions such as Homer G. Phillips Hospital (a center of indigent care and medical training), a significant expansion in job opportunities, and the passage of anti-discrimination legislation prior to the 1964 Civil Rights Act.  Their actions also initiated the emergence of black city appointees and elected officials prior to the 1965 Voting Rights Act, and pivotal U.S. Supreme Court rulings such as Shelley v. Kraemer (1948) and Green v. McDonnell Douglas (1973), which produced landmark fair housing and fair employment precedents, respectively.

Located along the Mississippi River near the Missouri River, St. Louis metaphorically and literally was a “gateway city” linking northeastern financial interests to the western frontier.  It also joined a southern historical heritage based in slavery with midwestern migration, immigration, and industrial patterns.  Racial segregation in the twentieth-century was a pervasive feature of the city’s landscape.  Typical of other communities in this “border South” region, however, Jim Crow apartheid was more uneven in its scope than in the former slave territories of the Deep South.  Hence, against the backdrop of a city and region that was neither fully northern nor southern in its economic, cultural and political orientation, this book addresses, in microcosm, the legal and casual forms of U.S. racial oppression that black activists fought through a combination of electoral activism, legal protest, and mass insurgency.

Grassroots at the Gateway contends that popular struggle was a key means through which class, and class relations, formed among African Americans.  The book charts the development of a black working-class public through successive periods of struggle, including the street protests, neighborhood rebellions, and industrial unionism of the 1930s and the March on Washington Movement of the 1940s, which further consolidated an urban black working-class politics of resistance.  This bloc continued to advance progressive reform  in St. Louis through a nonviolent crusade against segregated public accommodations, and legal action by the NAACP against school segregation.  Yet, the field of protest shrank by the early 1950s as radical black working-class veterans of the 1930s and 1940s, like Hershel Walker, and black freedom organizations associated with the Communist Left such as St. Louis’s Negro Labor Council, faced government represssion and were abandoned by other activists fearful of anticommunist hysteria.

St. Louis’s next watershed moment came in the late 1950s, when a revitalized local NAACP, under Ernest Calloway’s presidency, launched a mass offensive against the entire edifice of Jim Crow and de facto racism.  This phase of insurgency continued into the 1960s as black St. Louis workers fought the corrosive effects of automation, the corporate-sponsored demolition of the city’s historically black Mill Creek Valley district, and rampant police violence and abuse.  Grassroots activists working through local chapters of the Congress of Racial Equality (CORE) and A. Philip Randolph’s Negro American Labor Council (NALC) abandoned demands for “fair employment” in favor of campaigns for “full employment.”  The zenith of this period was the 1963-64 Jefferson Bank Boycott, which resulted not only in mass disruptions of the city’s financial industry in response to discriminatory hiring practices, but also led to a “general strike” against Mayor Raymond Tucker’s administration and downtown businesses.  Shortly after the boycott, dissidents formed the Action Committee to Improve Opportunities for Negroes (ACTION) and continued their civil disobedience campaign against local utility companies, Anheuser-Busch, and the McDonnell Aircraft Company, all among the largest employers in the city and region.

As “Civil Rights” segued to “Black Power” in the mid-to-late 1960s, the movement’s class character became more heavily contested.  Until World War II most black women were domestic servants and most black men were common, casual laborers.  A small middle class existed based largely on stable household income and adherence to norms of “respectability.”  As the successes of black freedom struggle generated economic opportunity and occupational mobility, the middle class grew and became increasingly socially and culturally distinct from the working class.  The black political landscape became more fractured and conflict-ridden, turning “Black Power” into a battleground of competing programs of black self-determination and community organization.  Internal changes were accompanied by police and FBI harassment, the rise of the “New Right,” and corporate-promoted strategies of co-optation, all of which were designed to suppress black worker insurgency prevalent since the 1930s.
By the late 1970s, social scientists identified an emerging black urban “underclass,” and asserted that cultural pathology rather than structural inequality, was to blame for the worsening conditions of the black working poor.  This argument ascended during the Reagan years, and had the effect of isolating entire strata of working-class African Americans mainstream society, vilifying them in public policy, and justifying a general retreat by the federal government from social welfare liberalism. Members of the new post-Civil Rights black middle class redirected the movement’s energies toward budding corporate partnerships and professional “firsts” over working-class employment and involvement in electoral politics; and private negotiation over grassroots mobilization and participatory democracy.  Yet, as the economic precariousness of the black middle class today attests, the achievements of post-‘60s black professionals have been fragile.

Grassroots at the Gateway contributes to three bodies of historical scholarhip.  First, it engages the interdisciplinary field of “Black Freedom Studies.”  In particular, it speaks to the field’s focus on black protest outside the South, andextending in both directions the standard 1954-65 timeframe of the Civil Rights Movement.  Second, this work corresponds to African American urban history’s growing attention to black urban communities in border regions, and the field’s emphasis on working-class institutions and community-building.  Third, this book is attuned to “Working Class Studies,” especially through its interest in the diversity of  workers’ experiences in communal spaces outside the provinces of the workplace and labor unions.  My conception of the working class encompasses not only those in skilled trades or mass production industries, but also janitors, lower-level office clerks, bus drivers, taxicab drivers, store sales staff, barbers, police officers, beauticians, firefighters, secretaries, hotel employees, casual hustlers, daycare workers, postal workers, welfare mothers, and the unemployed.  Similar to the work of Manning Marable, Robin D.G. Kelley, Kimberley L. Phillips, Robert O. Self, and other revisionist historians of class politics and social movements within the black community, Grassroots at the Gateway urges scholars not only to rethink the master narrative of black freedom struggle from the 1930s on, but also African American social and cultural history overall.

In writing this book, I used St. Louis as a case study to better understand the contemporary conditions of the “new” black middle class that emerged after 1965, and the expanding black urban “underclass” whose poverty and isolation have deepened since the 1970s.  How do we make sense of the relationship between the two groups?  And what does this relationship mean for the present and future, in terms of the possibilities for a transformative black politics?  African Americans have long viewed their individual circumstances as linked to their collective fate.  Black people in the United States continue to act on this understanding of “linked fate,” despite their growing economic, social, and even national/ethnic differences.  Yet, how black people interpret and make sense of their linked fate, in terms of deciding exactly what connects them as a community, which specific issues are worthy of collective interest, and who should lead the pursuit of this agenda are matters that have not been adequately historicized. Grassroots at the Gateway confronts these questions, which are even more relevant in contemporary African America than in the decades covered in the book.

Finally, Grassroots at the Gateway pinpoints the long-term origins of the current political, economic and social marginalization of the black working-class majority.  I attempt to show how the black “underclass” is less a sociological fact than it is an ideological foil for the anti-black, anti-labor, and illiberal discourses that have dominated U.S. politics since the 1970s.  By evoking a period in which working-class African Americans were proud historical actors at the forefront of movements for social transformation, rather than objects of derision, pity, and middle-class “role modeling,” my desire is to urge audiences to rethink the black past while employing it critically to inform our approaches to addressing black communal needs in the present. Working-class activist politics, among African Americans and others, have been eroded by daunting structural and political challenges.  But as recent campaigns for collective bargaining, the rise of the “Occupy” movement, and even Barack Obama’s historic election as the nation’s first African American president have all demonstrated, the trajectory of history is open-ended.  Transformative working-class politics have the real possibility of prevailing in the twenty-first century.  I hope that Grassroots at the Gateway will be read as a contribution to this project of social change.