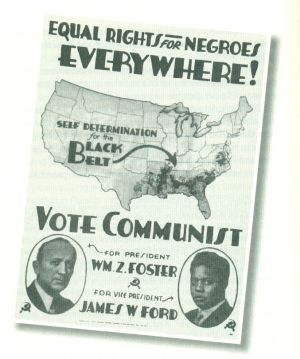 The Black Belt Republic was a proposed black autonomous state in the American Deep South proposed by African American communists and for a time endorsed by the Soviet Union and the international communist community. The Black Belt itself is a crescent shaped band of predominately African American counties stretching from eastern Virginia to eastern Texas.  The term was also used to describe the rich, almost black soil prevalent across the region.

Initially, the American communist party did not have any sort of special relationship with or policy towards African Americans. In 1921 however, Soviet leader V.I. Lenin criticized American communists for not recognizing the importance of “Negro work” and not actively recruiting blacks, who he saw as the most oppressed of the proletariat and a group with potential to spearhead a radical new American labor movement. Soon afterwards the African Blood Brotherhood (ABB), which was the first black group to be incorporated into the U.S. Communist Party (CPUSA), began urging it to develop a cohesive and decisive policy on racial issues.

A handful of black communists, including ABB member Harry Haywood, studied at the International Lenin School in Moscow in the mid-1920s and explored ways in which the African American experience of oppression fit in with the larger framework of class struggle against imperialism. In Moscow, Haywood drew parallels between the struggle of blacks in the United States and anti-colonial movements elsewhere, declaring the oppressed black population in the South to be a “nation within a nation.” He further developed the thesis on the Black Belt Republic and called for the establishment of the Republic in a detailed “Resolution on the Negro Question,” which he submitted to the Sixth Congress of Communist International (COMINTERN) of 1928. The resolution condemned racism within the Communist Party of America, acknowledged that many whites would live as citizens in the Black Belt Republic, and pointed out the unionizing needed in the Black Belt would be primarily of agricultural workers, who made up 75% of the black population in the south.

Soviet leader Josef Stalin embraced the Black Belt Republic as a viable and promising solution to the “Negro Question.”  He declared black self-determination to be a priority of the international communist community, and commanded the American Communist Party to eliminate those perceived as racist from their ranks.

Stalin’s official endorsement of the idea of Black Belt Republic and black self-determination was extremely controversial within communist ranks. Many black leaders and communists were skeptical about the practicality and benefits of the Black Belt Republic especially when thousands of African Americans were leaving the region for Northern cities and industrial jobs.

Nonetheless the recognition of black struggle from an international organization was significant. Although the Black Belt Republic never came to be as an autonomous republic, and the CPUSA abandoned the idea by 1934, the concept of African Americans being in the vanguard of the coming Communist revolution, continued to hold sway long after the 1930s.