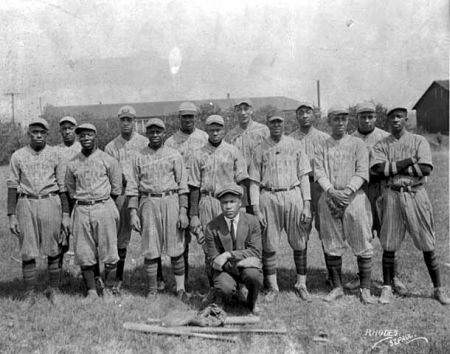 In the following article historian Bruce A. Glasrud follows the exploits of an all black baseball team in the southwestern Minnesota town of Pipestone in the 1920s which at the time had virtually no black residents.  Nonetheless the team competed with other white, all-black, and racially integrated teams as far away as South Dakota and Iowa.

During the 1920s and 1930s, the heyday of Jim Crow society, one of the remarkable victories of racist white supremacy emerged in the segregation of athletics on the national, state, and local levels. In baseball, for example, despite no southern teams in major league baseball, black players were excluded so that African Americans, led by Texan Rube Foster, established their own Negro Leagues. For both small and large towns in the Midwest, this segregation made for interesting combinations. Sometimes, an essentially all-white team would have one or two (or even four or five) black ball players, who were frequently paid in semi-professional baseball, and sometimes all-black teams were located in small towns as well as large cities. One such small town all-black team established itself in Pipestone, Minnesota in 1926. The Pipestone Black Sox, an all black baseball team, played its first game on May 16, 1926.

Pipestone, an historic community located in southwestern Minnesota, normally had few black residents. As did many other small towns in the upper Midwest, it had an ardent craving for baseball, and especially for winning baseball. Often that necessitated hiring black ballplayers to come to Pipestone (this situation lasted into the 1950s, when the current author watched black players such as “Thumper” Jackson make Pipestone baseball of championship caliber). During the 1925 baseball season, an integrated team, the Pipestone Independents, emerged. At least four black ballplayers joined up with white ballplayers, and on a few occasions with a Native American pitcher, George BlueBird; the Independents ended a fairly respectable season with a record of 14 wins, 11 losses, and 2 ties. Two local newspapers, the Pipestone Leader and the Pipestone County Star, carried reports of the games.

The catcher and manager of the Independents was Frank Whitfield, an African American resident of Pipestone. Whitfield, variously described as a porter, barber, and owner of a shoe shine parlor, likely acquired status and respect in Pipestone. No untoward race incidents occurred in either 1925 or 1926, or at least no reported ones. The Independents played teams from Flandreau and Sioux Falls in South Dakota, Sioux City, Iowa, and Minneota and Tracy in Minnesota among numerous others in the tri-state region. The Sioux City team, named the Ghosts, was an all-black team; two days after their engagement Scotty Henderson, a black pitcher for the Ghosts, joined the Independents. Shortly two other Ghosts joined the Independents. The last game of the 1925 season was played on September 18 when the Independents hosted, and lost to, the Sioux Falls Canaries.

By the 1926 season the Pipestone Independents had become the “Original” Philadelphia League of Nations. The season started with a game between Pipestone (League of Nations) and the Sioux Falls Black Sox, the latter an all-black team. George Bluebird pitched and manager Frank Whitfield caught for the Pipestone team. Within two weeks a major change affecting both teams transpired. The Pipestone Leader, on May 6, 1926, carried a story reporting that “Frank Whitfield has taken over the Sioux Falls Black Sox, a colored team, who will report for action in this city Monday and will make their headquarters here.” Furthermore, Herbert Whitfield (perhaps a brother of Frank Whitfield) traveled to Kansas City in a search to locate more African American baseball players. (In the 1950s a likely relative, Jerry Whitfield, attended school in Pipestone with the author of this article.) The Sioux Falls Black Sox became the Pipestone Black Sox, and soon was recognized as one of the region’s finest teams, black, white, or integrated.

Why did the Black Sox establish themselves in Pipestone? Numerous reasons exist. Certainly owner and manager Frank Whitfield’s Pipestone experiences were paramount. The previous year, at least four black ballplayers fared well in the small community. The community enthusiastically supported the Independents, and Whitfield hoped to expand upon that support. The local newspapers were loyal. For travel purposes, Pipestone also enabled trips to localities in the tri-state area. In 1925 a new baseball field had been provided in Pipestone, a good place for the Black Sox to play. An important related question is why were the Black Sox available? Most likely competition in Sioux Falls with the established Sioux Falls Canaries was too stiff.

In the upper Midwest of Minnesota, Iowa, and South Dakota black baseball players were especially popular; as a result substantial attendance followed the black teams especially for games on holidays, special community days, and fairs. As Alan Muchlinski and David Muchlinski pointed out, over 1,000 people attended a Black Sox game in Flandreau, South Dakota, a crowd of 1,500 saw the Black Sox play Cherokee, Iowa at the Plowing Match Celebration, and 2,200 spectators were present at a Black Sox game at nearby Jasper, Minnesota, against prominent black baseball star John Donaldson and the Lismore Gophers, another all-black team.

A writer for the Ivanhoe Times reported that “the Sox club is one of the strongest aggregations playing baseball in this section this season. They make baseball a business and their ability to handle the sphere and willow is their means of livelihood.”  Since the Black Sox included players with considerable Negro League experience, it was no surprise that they were referred to as an excellent baseball team.  Pipestone players previously played for teams such as the Columbus Buckeyes, Dayton Marcos, Detroit Stars, Indianapolis ABCs, Kansas City Monarchs, and the Toledo Tigers. Among the Pipestone players, one man stood out—“Lefty” Wilson.

“Lefty” Wilson was an alias. Born Dave Brown in San Marcos, Texas, Brown first pitched for the Dallas Black Giants, was noticed and bailed out of trouble by Rube Foster who in 1920 took Brown to play for his Chicago American Giants. A left handed pitcher, hence the “Lefty,” Brown compiled remarkable records playing in Chicago and then New York. However, in 1925, Brown engaged in an argument with a man whom he is alleged to have killed. Brown skipped town and headed for the upper Midwest where he played baseball primarily with traveling teams to keep authorities from noticing him. In 1926 Brown, now called “Lefty” Wilson, pitched at least three games for the Pipestone Black Sox. He won all three, and, in perhaps an apocryphal story, in a game against Granite Falls when his teammates asked him to bear down, Wilson struck out the side with nine pitches. The following year, 1927, the Pipestone County Star referred to Wilson as the “great colored twirler who pitched a couple of games last year.” Known as one of the greatest all time left-handed Negro League pitchers, Brown was honored later by the Hall of Fame.

Unfortunately, by mid-July, 1926, financial considerations likely began to plague owner/manager Frank Whitfield who sold his Pipestone shoe shining parlor and, according to the Pipestone County Star, he decided to concentrate on directing the affairs of the Black Sox baseball team. However, by mid-August Whitfield sold the team and the Black Sox moved to Marcus, Iowa. The only logical reason for this move was financial; Whitfield, perhaps unable to pay his players, and/or maintain the expenses of a baseball club, sold the team. Otherwise, conditions seemed propitious in Pipestone—the team received warm support, race relations appeared satisfactory, and the community proudly noted the success of the Black Sox. During the year the Pipestone Black Sox played 79 games against teams from Minnesota, Iowa and South Dakota. Despite the fact that the vast majority of the games were not played in Pipestone, their won/loss record was an astounding 50 and 24 for a .676 winning percentage.

The Pipestone Black Sox played against very good teams. The region also included three additional all black teams, and 12 of the Black Sox games were played against the other teams; their record against those teams was 8 wins and 3 losses. Even though the Black Sox played few games in Pipestone, the Pipestone newspapers and people from the community were proud of the Black Sox and enthusiastically supported their efforts. Perhaps they enjoyed the notoriety that the winning and the all-black team brought to Pipestone. The team was a source of pride. As the Muchlinskis’ said, “Pipestone had a winning baseball team and because of that team, other people knew about Pipestone.”