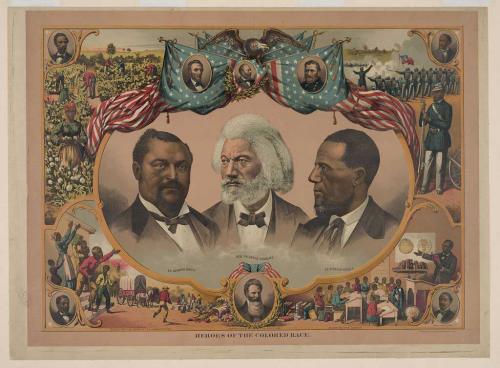 After the 15th Amendment was passed in 1870 allowing most of the black males in the former Confederate states to vote, the Republican Party (also now known as the Grand Old Party or GOP) commanded the loyalty of an overwhelming majority of African Americas, prompting Frederick Douglass to remark that for them, “The Republican Party was the ship and all else was the sea.”

Many of the newly enfranchised Southern black men now formed “Black and Tan” clubs, which along with similar organizations like the Union League, helped to institutionally tie these voters to the Republican Party.

Black Republican votes were also driven by white terror. Beginning with the founding of the Ku Klux Klan in 1866 and escalating through the late 1860s and 1870s, Southern whites used violence to intimidate black would-be voters which at first helped solidify their allegiance to the GOP. Thousands of black voters were murdered in Texas, Louisiana, Mississippi, and South Carolina. White terrorists also intimidated and ostracized Southern whites who supported the Republican Party. They harassed the children of white Republicans in schools and isolated the wives of prominent white Republicans in churches and social clubs. On many occasions direct violence, usually reserved for African American Republican voters, was used on white Party activists as well.

The violence and intimidation of black and white voters, often called the “shotgun policy” or the “Mississippi Plan,” destroyed the effectiveness of the Republican Party in most areas of the South as an alternative to one-party (Democratic) rule. Whites left the GOP and rejoined the Democrats or quit politics. Blacks who continued to vote did so at the risk of being killed.

White Republicans who remained in the Party were increasingly convinced that they could survive politically only by removing black GOP officeholders and leaders and in some instances by jettisoning black voters altogether. These Republicans, known as the “Lilly Whites,” fought the Black and Tan Republicans for control of the Party. They remained warring factions until the 1930s when African Americans deserted the GOP to support the policies and administration of Democratic President Franklin D. Roosevelt.