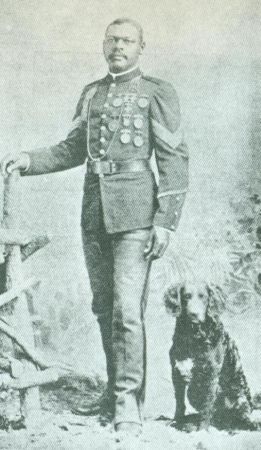 Horace Waymon Bivins, a Buffalo Soldier, was born on May 8, 1862, in Accomack County, Virginia. His father Severn S. Bivins and his mother Elizabeth Bivins were free black farmers on Virginia’s Eastern Shore. His parents taught Bivins to farm, and at the age of fifteen, he was in charge of an eight-horse farm near Keller Station, Virginia.

Bivins, however, yearned for a life away from farming, and at seventeen, he entered Hampton Institute in Virginia, where he was first introduced to military training.  In 1887, Bivins joined the U.S. Army as a private. He was ordered to Jefferson Barracks, Missouri and assigned to Troop E, 10th U.S. Cavalry. Bivins was eventually stationed with the regiment at Fort Grant in Arizona Territory. There he took part in the campaign against Geronimo during the final days of the Apache Wars in the Southwest.  An expert marksman, Bivins won eight medals and badges given by the War Department in shooting competitions between 1892 and 1894

During the Spanish-American War, Corporal Bivins served as a gunner with the 10th Cavalry in Cuba. During the Battle of Santiago on July 1, 1898, Bivins operated a three-man Hotchkiss mountain gun alone and suffered a head wound as his fellow soldiers were pinned down under fire.  Commended for his bravery, Bivins became a hero of the war as his actions were described in both military and civilian newspapers.  In 1899, he wrote of his Cuban experiences which appeared in the book Under the Fire with Tenth Cavalry, one of the earliest and most popular Spanish-American War accounts written by participating soldiers.

Bivins was promoted to sergeant and served six months in the Philippines in 1901, often leading patrols against the forces of Emilio Aguinaldo.  He left the Philippines in July 1901 and was stationed at a series of military posts in Montana, California, Wyoming, New York, and Vermont. He retired from the U.S. Army on July 19, 1913 and settled in Billings, Montana.

In 1917, Bivins proposed organizing a unit of volunteers in Virginia for the U.S. Army as it prepared to embark for France to fight in World War I.  The Army turned down his proposal but it did make the 55-year-old former soldier a captain in the infantry.  For six months he served on active duty at Camp Dix, New Jersey before retiring again and returning to Billings, Montana.  Horace Bivins passed away in Billings in 1937 at the age of 75.