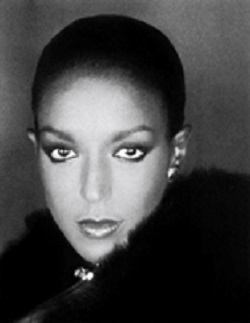 Billie Blair is an African American model who rose to fame during the 1973 fashion extravaganza at the Palace of Versailles near Paris, France. She later left the fashion world to pursue her passion for evangelism. Born to Hattie and William Blair in Arkansas, Billie Blair is the daughter of a minister and was raised in the Baptist Church. Although her exact birthdate is unclear, 1951 is her birth year. As a youth, Blair’s family later relocated to Flint, Michigan. During her teenage years, Blair developed a love for fashion, and dreamed of being a model on magazine covers. However, those in Billie Blair’s life thought it impossible for a Black girl from Michigan to find success as a model.

In 1973, Blair began her modeling career accepting local work in Detroit, Michigan. While modeling for a Detroit auto show, Marji Konz, fashion editor of the Detroit Free Press, discovered Blair and hired her to do a three-day color supplement in New York City. Although she was there with the Free Press, Blair signed with the Ellen Harrth agency, allowing her to relocate to New York City. Following her move, Blair travelled to Asia and Europe, working with revered designers. She was known for her almost shaved head, mesmerizing drama, and poise. Her dramatic gestures set her apart from other models. Her ability to incorporate movement into her craft perfectly complemented the fashions of the time, bringing garments to life with enchanting grace.

The defining moment of Billie Blair’s modeling career was her work at the 1973 Battle of Versailles fashion show in Versailles, France. American fashion designers were invited on short notice and with a low budget, so they could not afford popular and expensive models. As a result, designers made a rare decision to hire ten African American models to their team of thirty-six models. During the show, Blair and other American models’ animation and energy helped them to outperform other models in the French show. Furthermore, the models’ mesmerizing performance ignited an interest in African American culture and greater diversity in the American fashion industry.

Although modeling in the 1970s was not as lucrative as it is for contemporary models, especially for African American women, Blair’s modeling career provided her with the funds to participate in New York’s indulgent club scene. After almost twenty years, she grew tired of the culture of New York. In 1987, she returned to Flint, Michigan and enrolled in Saginaw Valley State University with the intention of becoming a nurse. However, Blair stated that she had a vision in October of 1987 where she felt God calling her to become a minister. Blair attended Faith Tech Ministries Bible School and in 1995, she became an ordained minister. Currently, Blair continues to serve her local and global community through work as a minister in Defiance, Ohio.