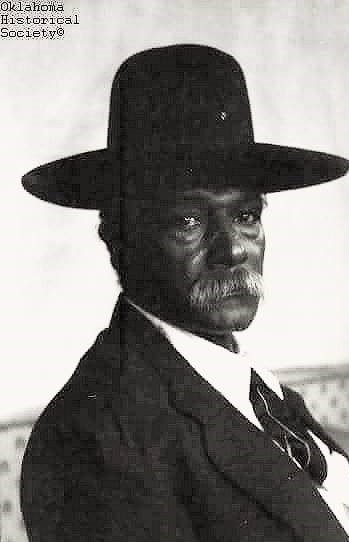 Bill (or Billy) Colbert is best known for serving as an officer of color who upheld the law in the Indian Territory during the 19th and early 20th centuries. Though the details of his early life are scant, historical records indicate that he was of African Choctaw ancestry. His position as a descendant of former slaves and America’s first people gave him unique knowledge of the local culture. Colbert’s knowledge of the local language and customs was recognized by U.S. District Court Judge Isaac Parker who from Fort Smith, Arkansas, had jurisdiction over the Indian Territory. In March 1875, Judge Parker appointed Colbert to serve as a US Deputy Marshall. In that position he joined Bass Reeves and two other black Deputy U.S. Marshals given the responsibility for tracking down lawbreakers of any color in the Territory. Colbert was among the most prominent lawmen of his day, and occasionally worked in concert with Bass Reeves. Although some sources disagree on whether Colbert was truly commissioned with the title of Deputy, he was at the very least a federal “posseman” who served warrants and tracked outlaws out of Fort Smith, Arkansas.

Patrolling Indian Territory was dangerous work. Although records are sparse, a handful of reports indicate that on more than one occasion Colbert was required and authorized to use deadly force. In 1896, a newspaper article from the town of Ardmore describes the hunt for the murderous Christian brothers and their notorious gang. According to the article, the federal posse included Deputy Marshals Bass Reeves, Bill Colbert, and four others. Together, the lawmen tracked the gang to a pair of cabins where a shootout ensued. Although the Christian brothers escaped, the six Deputy Marshals either arrested or killed two additional gang members.

After decades of public service marked by danger and violence in Indian Territory, Bill Colbert retired. His departure was likely motivated by the transition of what had once been Indian Territory to the state of Oklahoma in 1907. Colbert lived in his long-time home in Atoka, Oklahoma until his passing in 1933 at the age of 98. Today, Colbert is remembered as one of only a handful of African American law officers operating in Indian Territory, a unique and often forgotten feature of the American West.