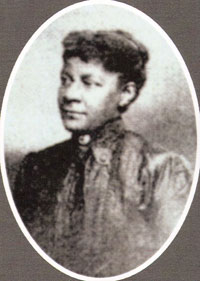 Sarah Blair was born into slavery on Christmas Day, 1855, on the Blair Plantation near Greensboro, North Carolina. After the Civil War Sarah lived with an aunt in Knoxville, Tennessee and changed her name to Gammon, the aunt’s name.  In 1870, Knoxville Judge John L. Murphy was appointed to a judicial post in Virginia City, Montana Territory.  Sarah, about 15 years of age, was offered free transportation to Montana in exchange for caring for the Murphy children.  She accepted and the family arrived in Virginia City, Montana in January 1871.

Sarah entered Virginia City during its gold rush and quickly found work as a chambermaid at Virginia City’s Madison House Hotel.  In 1872 she married William Leonard Brown, a successful gold miner.  They had two sons and a daughter.  Within a few years, however, both her sons and her husband died of diphtheria.

Sarah and surviving child, Eva, relocated to Laurin, Montana Territory, where they lived with a merchant family.  Eva Brown died of pneumonia in 1881 at the age of nine.  Two years later Sarah married Stephen Bickford, a white native of Maine, in 1883.  Four children were born to that marriage, Elmer in 1884, Harriett in 1887, Helena in 1890, and Mabel in 1892.

In 1888, Stephen and Sarah Bickford acquired a portion of the water system that supplied Virginia City with drinking water  On November 13, 1890 they also purchased “Fisher’s Garden,” a farm east of Virginia City which produced vegetables and fruits for the local population including a small colony of Chinese.

Stephen Bickford’s death in 1900 at age 68 from pneumonia left Sarah a widow for the second time.  This time, however, she and her four children had some resources provided in his will including two-thirds interest in the Virginia City Water Company, a small farm, Virginia City town lots, various interests in nearby gold mining claims, and one share of stock in the Southern Montana Telegraph and Electric Company.

Sarah Bickford assumed control of the water company, managing the books, billing customers, and directing other company matters.  She also continued to manage the farm east of the city.  In 1902 Bickford purchased the Hangman’s Building, one of the oldest and largest structures in the town.  From here she ran the Water Company.  Now assisted by her son, Elmer, who became a master plumber, Bickford continued to expand the business, acquiring natural springs and building a reservoir to supply the growing population of the region.  Although her oldest daughter, Virginia, helped with the books, Sarah enrolled in a business management course through a Scranton, Pennsylvania correspondence school to become more proficient in company management.

In 1917, Bickford purchased the other third of the Water Company from longtime partner Philip Harry Gohn, the second investor when Stephen Bickford originally purchased the business in 1888.  At this point Sarah Bickford became the only African American woman in Montana and possibly in the United States to own a utility company.  Bickford continued to manage the Virginia City Water Company until she died of a heart attack in her home on March 22, 1931 at the age of 76.