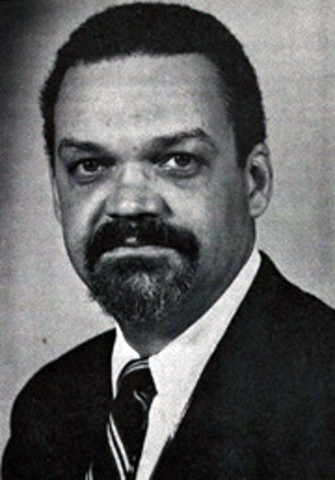 Albert Turner Reid, born in Hampton, Virginia, November 13, 1927, the son of William Thaddeus Reid and Mae Elaine Beamon Reid, was a renowned mathematician who earned his bachelor’s degree at Iowa State University in 1949. From 1950 to 1953, he studied probability and statistics at the University of Chicago, but he never completed his doctorate. Despite this, he found work as a research associate in mathematical statistics at Columbia University in New York and was assistant research statistician at the University of California at Berkeley. He authored his first scientific paper at age 18 and by age 26 had published eight academic papers, mainly pertaining to mathematical biology.

In 1954, Reid married Dr. Rodab Phiroze Bharucha (also a mathematician), a native of India, whose surname he adopted. By 1956 Bharucha-Reid was employed in a teaching position at the University of Oregon and in 1961 was Associate Professor of Mathematics at Wayne State University in Michigan, where he headed the Center for Research in Probability. During this period, he was also a visiting researcher and professor at the Mathematical Institute at the Polish Academy of Sciences in Warsaw, Poland, the Institute Mathematical Sciences in Madras, India, and the University of Wisconsin. He also was awarded research grants by the United States Air Force and the United States Army, the National Institutes of Health, and the National Science Foundation.

Bharucha-Reid’s area of expertise was probabilistic analysis and its application and Markov chains. He published over 70 papers, some of which applied mathematics to biology, physics, engineering and economics, and several books, including An Introduction to the Stochastic Theory of Epidemics and Some Related Statistical Problems (1957), Elements of the Theory of Markov Processes and Their Application (1960), Random Integral Equations (1972), Probabilistic Methods in Applied Mathematics (1968), Probabilistic Analysis and Related Topics (1978), and Random Polynomials, Probability and Mathematical Statistics (1986). Internationally appreciated, his academic publications have been translated into Russian, among other foreign languages.

Having been promoted to full professor and after rising to Dean and Associate Provost of Graduate Study at Wayne State, Bharucha-Reid headed south in 1981 to become Professor of Mathematics at the Georgia Institute of Technology. Two years later, he was a distinguished mathematics professor at Atlanta University. He was a member of the Graduate Record Examination Board in Princeton, New Jersey, from 1978 to 1982, and was on the Board of Governors of the Cranbrook Institute of Science in Bloomfield Hills, Michigan, from 1977 to 1980. In 1984, he was awarded an honorary science degree at Syracuse University. Bharucha-Reid was the editor of the Journal of Integral Equations until his death.

Dr. Albert Bharucha-Reid died on February 26, 1985, in Atlanta, Georgia. He was 57 at the time of his death and survived by his wife and two sons, Kurush Feroze and Rustam William. The National Association of Mathematicians, an African American organization, established a lecture series in his honor.