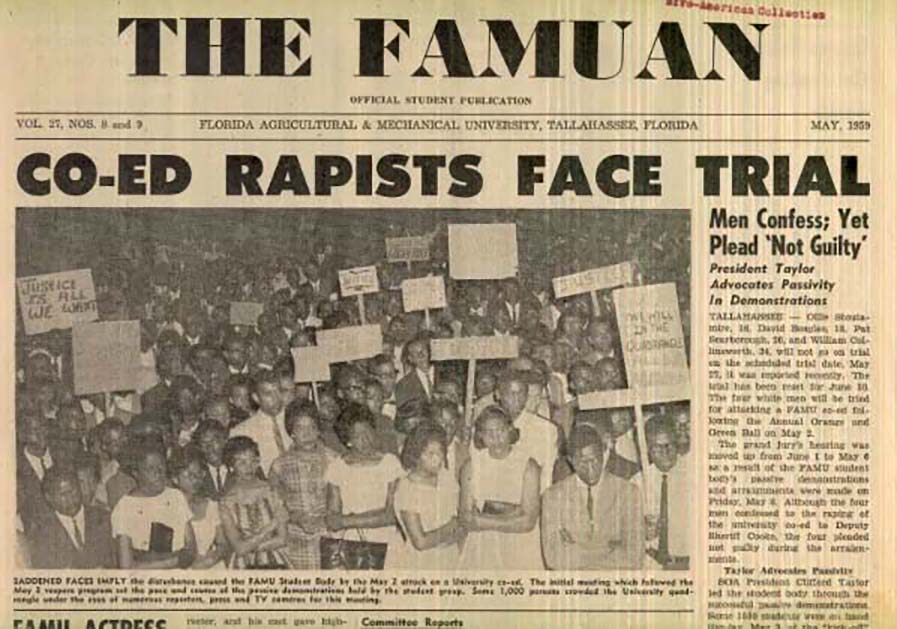 Betty Jean Owens, an African American woman and Florida A&M University student, was raped by four white men, William Collinsworth, Ollie Stoutamire, David Beagles, and Patrick Scarbourough, on May 2, 1959. Unlike most cases involving white men raping black women in the pre-1970 era, the four white men who raped Owens were convicted and sentenced for their crimes.

Much of Owens’s early life is unknown but at the time her rape occurred she was a college student attending Florida A&M University. On May 2, 1959, Collinsworth, Stoutamire, Beagles, and Scarborough, armed with shotguns and switchblades, came to the car where Owens and three of her friends, Richard Brown, Thomas Butterfield, and Edna Richardson were parked in Jake Gaither Park in Tallahassee, Florida.

The four white men ordered Owens, Brown, Butterfield, and Richardson out of the car. Scarborough forced Brown and Butterfiled to kneel while Beagles held Owens and Richardson at knifepoint, slapping Owens when she started to cry, and threatening to kill her. Scarborough ordered the two men to get back in the car and drive away. Richardson then escaped, running further into the park. Owens, however, was now alone with the four white men.

The men pushed her to the backseat of their blue Chevrolet, drove her to the other side of Tallahassee, and then repeatedly raped her. Brown and Butterfield found Richardson and the three went to the police station to report the incident. Officer Joseph Cook Jr, a nineteen-year-old intern, who was on duty at the police station that night, called for police back up and went out to search for Owens and her rapists. He spotted the blue Chevrolet and chased the four men. When he and other policemen caught up with them, they searched the car and found Owens bound and gagged on the backseat floor. The police arrested Collinsworth, Stoutamire, Beagles, and Scarborough whom they took to jail. There the four men, thinking they would not be punished, confessed in writing to the rape of Owens.

When news about Owens’s rape got back to Florida A&M, 1,500 students gathered at an auditorium on campus calling for justice for Owens. They announced they would petition Florida Governor Fuller Warren for a speedy and impartial trial. The following day over 1,000 students staged a protest march in Tallahassee.

Because the demonstrations were widely covered by local and national media, local officials were forced to take action against the accused men. On May 6, 1959, Judge W. May Walker called a grand jury into special session. With an estimated 200 black spectators watching, the grand jury indicted the four men and a trial was scheduled for June 12.

On June 12, 1959, Owens told a packed courtroom the events that occurred that night and her subsequent rape. The jury later found the four men guilty and they were sentenced to life in prison. One of the four men, Beagles, was paroled in 1965. In 1969, however, he attempted to track down Owens to murder her. Instead he murdered another women name Betty Jean Robinson Houston, by mistake, thinking it was Owens. Beagles was arrested for that murder and again sentenced to life in prison. Owens, however, disappeared from the public record.

Danielle L. McGuire, At the Dark End of The Street: Black Women, Rape, and Resistance, A New History of the Civil Rights Movement from Rosa Parks to the Rise of Black Power (New York: Vintage Books, 2010); Danielle L McGuire, “It Was like All of Us Had Been Raped”: Sexual Violence, Community Mobilization, and the African American Freedom Struggle,” The Journal of American History 91, no. 3 (2004): 906-31.