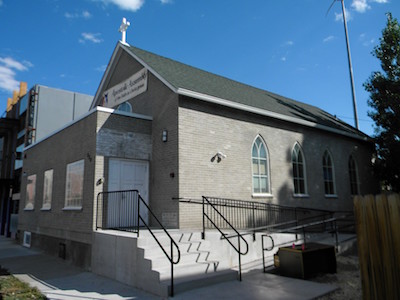 Bethel AME Church Reno is the longest operating African-American congregation in Nevada. An African Methodist Episcopal congregation of seven organized it in 1907. Its first building was constructed in 1910 at 220 Bell Street in Reno, Nevada. The AME Church sent Reverend William Solley to Reno to facilitate construction of the new building for the small congregation. The little church was built on a .039-acre parcel located just south of the Union Pacific railroad tracks and had a small rectangular, gable-roofed vestibule with a single entry and four prominent stained glass windows.

In 1919 founding members of Bethel AME Church, along with several prominent whites, formed the first Nevada chapter of the National Association for the Advancement of Colored People which made Bethel a major tool in promoting racial equality and community involvement.

The church membership grew steadily, and in early 1941, the presiding pastor, Reverend E. H. Booker, sought to find new and bigger quarters for the congregation. The church made an offer on an existing building called Dania Hall located at Seventh and Sierra streets. However, a large group of property owners from that neighborhood demanded that the church be prevented from taking possession of the building for fear that property values in the area would suffer. As a result, the congregation relinquished its contract to purchase Dania Hall and decided to remodel the present church on Bell Street. The renovation and expansion of the church included a new brick facade, vestibule enlargement, and the construction of a full basement to house offices, a kitchen, a choir room, library, study, and parlor. The remodeling of the church remained unchanged until 1993.

Known as the “Biggest Little Church in the West,” Bethel became a religious, social, and political center for the Northern Nevada African American community, initially for black settlers in the early years of the twentieth century, and later for local civil rights activists during the 1960s. It also acted as the official meeting location of the NAACP Reno Chapter.

Bethel also embraced black out-of-state divorce-seekers and those in need of accommodations by providing guidance and boardinghouses such as the one owned by congregants, the Needham Family, located at 501 Elko Avenue. The church also provided entertainment and meals.

In 1993 the congregation acquired a larger building on Rock Boulevard in nearby Sparks, Nevada, and the old church was purchased by a private owner and converted to a homeless shelter for veterans. The original building and site was added to the National Register of Historic Places in 2001. In December of 2003, Bethel AME Reno bought back the old building and now rents it out for community events and group gatherings. Today, Bethel AME Church Reno has over one hundred members, and its sanctuary is one of the most significant buildings associated with African American history, civil rights movement, and African American population in the state of Nevada. Bethel AME continues to support the Reno area as a humanity and diversity advocate.