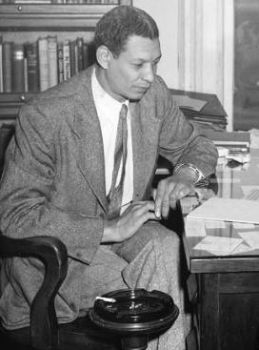 Civil rights activist Edwin C. “Bill” Berry was affiliated with the Urban League for over 30 years and served as executive director of the Chicago Urban League from 1956 to 1970. When he arrived in Chicago he denounced the city’s segregationist practices and drove anti-discrimination legislation in the city and state. He was a leader of the Chicago Freedom Movement.

Edwin Berry was born on November 11, 1910 in Oberlin, Ohio to John A. Berry, an attorney, and Kitty Berry, a homemaker. He was one of five children. At the age of six Berry’s father died. Kitty struggled to make ends meet, working as a boarder, seamstress and cook.

Edwin Berry grew up in Oberlin and attended Oberlin College on an academic scholarship. In 1935 he moved to Pittsburg and graduated from Duquesne University in 1938 with a degree in education. Berry began his career with the Pittsburgh Urban League as group work secretary.

In May of 1945 Berry moved to Portland, Oregon to found the Portland Urban League. Once in Portland he ignited a wave of racial policy reform. Berry’s new Urban League branch lobbied the Oregon legislature to adopt a Fair Employment Practices law. In 1949 the legislature approved the measure, and Oregon became one of a handful of states in the nation to have a law banning employment discrimination. Four years later in 1953 Berry and the Portland Urban League, along with others, successfully campaigned for the adoption of a statewide Public Accommodations law.

Berry’s success in Oregon did not go unnoticed. In 1956 the Chicago Urban League offered Berry the position of executive director. Berry accepted and relocated to Chicago where he confronted racial problems on a much larger scale. Berry and civil rights activists considered Chicago the most segregated northern city in the country because of its residential patterns and school boundaries. Unlike his experience in Portland, Berry also contended with a much more divided African American community and an entrenched political machine run by Chicago Mayor Richard J. Daley, who resisted racial reform.

Bill Berry brought his assertive leadership style to Chicago. He and his staff along with other organizations worked to pass the Fair Employment Practices Commission Act in Illinois and fought discrimination in housing. Under Berry’s leadership, the Chicago Urban League wrote a controversial report proving that predominantly white schools in wealthy neighborhoods were practically empty, while predominantly black schools in poor neighborhoods remained severely overcrowded. The report was a catalyst for significant educational change and the removal of the superintendent of Chicago Public Schools.

Upon his retirement in 1969, Berry moderated a talk show on WGN-TV and served as ambassador of goodwill for the Johnsons Product Company in Chicago, a black-owned national cosmetics firm. Bill C. Berry died in Chicago on March 14, 1987.