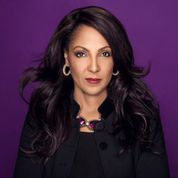 Michelle Denise Bernard is the President and CEO of the Bernard Center for Women, Politics, and Public Policy. Born on July 30, 1963 in Washington D.C., she is a graduate of Howard University, earning a BA in Philosophy and a minor in Political Science, and the Georgetown University Law Center, earning her J.D. She has been married twice and has two children with her first husband, Joe Jones. She is a political and policy analyst, media commentator, social critic, author, columnist, public speaker, and lawyer.

After completing her legal education, Bernard became a partner at the lobbyist and law firm Patton Boggs in Washington, D.C. She also became the President and CEO of the Independent Women’s Forum (IWF) and Independent Women’s Voice. In 2000, her political career began with her membership on the Bush-Cheney Presidential Inaugural Committee. She was also the chair for the District of Columbia’s Redevelopment Land Agency and a member of the journalism advisory board of the news magazine, The 74. Moreover, she is a former member of the Board of Trustees of Hampton University and the Board of Directors of the Coalition for Opportunity in Education.

Bernard has written numerous opinion editorials and commentaries that have appeared in several publications, including US News and World Report, The 74, The Hill, The Huffington Post, and The Root. Examples of her work are “Naming the Sin: Are Churches Helping to Stop Domestic Violence or Enabling It” and “Moving America Toward Justice: The Lawyers’ Committee for Civil Rights Under Law, 1963-2013,” both written in 2013. As a political analyst and media correspondent, she has appeared on HBO, CNN, MSNBC, and TV One. In 2009 Bernard co-created and hosted MSNBC’s education reform television special, “About the Children.”

Through this media exposure she has expressed her opinion on a variety of topics including the Iraq War, the political participation and voting trends of African Americans, Latinos, women, and millennials, advancing democracy for minorities around the world, and the 2016 path to the White House. In fact, Bernard is an outspoken advocate of human rights for people of color, women, and religious minorities globally. Despite her identification with the Republican Party, she has publicly supported the Black Lives Matter Movement and the #SayHerName campaign of the African American Policy Forum. Politically, she is an independent and an advocate of transpartisanship, where she believes that the American democracy is best served when the electorate votes for candidates and issues.

Bernard has received numerous awards including the Anvil of Freedom Award for journalism and democracy from the University of Denver’s Edward W. and Charlotte A. Estlow International Center for Journalism and New Media on January 23, 2015. She was also named the Spring 2015 Mary Louise Smith Chair in Women and Politics at Iowa State University. The following year, 2016, she was awarded a distinguished alumni achievement award from Howard University for outstanding post-graduate achievement in the fields of media, journalism, and public policy.