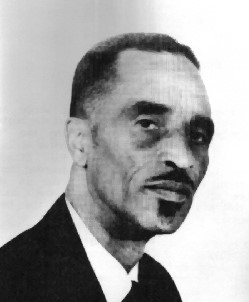 Benjamin Harrison Hill was a legislator, teacher, and African Methodist Episcopal (AME) minister born in Sidney, Nova Scotia, Canada on November 1, 1903 to Joseph L. Hill, a laborer in the steel mill industry and Anna E. Hill, a servant for a private family. Hill had one sister, Josephine “Josie”, and lived most of his childhood in Pueblo, Colorado where he attended public school.

Motivated by a calling to serve God and humanity, Hill studied law at the University of Nebraska and earned a graduate degree at Wilberforce University in Ohio. While teaching at Campbell College in Jackson, Mississippi during the early 1930s, Hill met his wife, Fannie Ezelle (Johnson), the only daughter of Bishop William Decker Johnson of Plains, Georgia. Hill pioneered a special education program for slow learners while working many years as a junior high school principal in Okfuskee County, Oklahoma.

In 1938, Hill was licensed to preach at the St. John AME Church in Plains, Georgia. He held pastorates at South Plains Mission, Red Hill, Georgia, and Sandy Hill, Georgia. He also preached at Ward Chapel in Boley, Oklahoma, Bethel AME in Claremore, Oklahoma, Ward Chapel in Muskogee, Oklahoma and Vernon AME Church in Tulsa, Oklahoma. Hill lived by his motto, “A Christian does what he ought to do, whether he wants to do it or not.”

From 1951 to 1971, Hill served as the editorial page editor of the Oklahoma Eagle newspaper in Tulsa, OK. Active with the Tulsa Urban League, Tulsa Council of Churches, National Conference of Christians and Jews, and the Ministerial Alliance, he also served as director of the Tulsa Economic Task Force and president of the Tulsa NAACP. He was a 32nd degree Mason and an Alpha Phi Alpha Fraternity member. Hill had an encouraging message for all and provided a sense of worth to individuals of all economic and social levels.

While pastoring at Vernon AME Church, Hill took a group of youth members from the church to the August 28, 1963 March on Washington near the Lincoln Memorial. His contributions to the AME Church denomination included serving as Director of Christian Education and editor of the AME Church Review. During the rise of the civil rights movement, Hill assumed a prominent role in promoting nonviolence in Tulsa, Oklahoma where he led joint worship services with black and white ministers and educators. In 1960, Hill introduced Dr. Martin Luther King when the civil rights leader spoke for the first time in Tulsa.

In 1968, Hill entered politics and was elected to the Oklahoma State House of Representatives as a Democrat from District 73. He served one full term and died on Friday, September 17, 1971 at the age of 67 during his second term. Shortly after his death, the Tulsa Park and Recreation Department named Hill as one of Tulsa’s outstanding citizens and named the Ben Hill Recreation Center at 210 East Latimer Place, Tulsa, Oklahoma 74106 in his honor. He was survived by his wife of 39 years, Fannie Hill and son, Lieutenant Colonel George F. Hill of Columbia, Maryland. He is buried at Crown Hill Cemetery in Tulsa, Oklahoma. An oil painting of Hill is displayed in his memory on the fourth floor of the Oklahoma State Capitol building in Oklahoma City, Oklahoma.