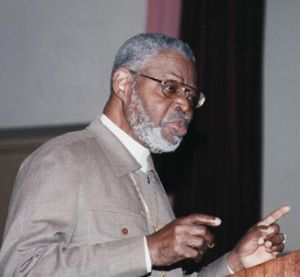 Yosef Ben-Jochannan was an Afrocentric historian whose work is focused mainly on black presence in ancient Egypt. He contends in his writings that the pharaohs came out of the heart of Africa and that the original Jews were from Ethiopia and were black Africans, and the white Jews adopted the faith and customs later. He has been accused of distorting history, and, since his work contradicts the prevailing view of Egyptian and African history, it is, therefore, controversial.

Ben-Jochannan was born an only child to an Ethiopian father and an Afro-Puerto Rican Jewish mother in a Falasha community in Ethiopia. He attended schools in Brazil, Spain, Puerto Rico, and Cuba and earned degrees in engineering and anthropology. He continued his education at the University of Havana, Cuba, where he earned a Master’s degree in architectural engineering. He earned a doctoral degree in cultural anthropology from the same school, and finally, he attended the University of Barcelona, where he earned another doctoral degree, this time in Moorish history.

Ben-Jochannan immigrated to the United States in the early 1940s. He was appointed chairman of the African Studies Committee at UNESCO headquarters in 1945. He served in that position until 1970. Ben-Jochannan began teaching Egyptology at Malcolm King College in 1950, and then he taught at City College in New York. He was an adjunct professor at Cornell University from 1976 to 1987. He has also taught at Columbia University, Al-Azan University and Rutgers. He led an archaeological dig in the Nubia region of Egypt in the 1990s and also leads an annual trip of black people to Egypt.

Ben-Jochannan is a prolific author, penning 49 books, such as Black Man of the Nile and African Origins of Western Religions. The subject of most of his books is ancient Nile Valley civilizations. He also wrote and co-wrote elementary and secondary school texts in the 1960s. He is the chair of the publishing house Alkebu-Lan Foundation and its subsidiary, Alkebu-Lan Books and Education Materials Associates. He donated his personal library of more than 35,000 volumes to the Nation of Islam in 2002.