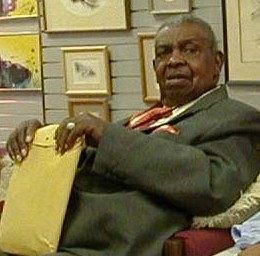 Ben Gross is a legendary civil rights and union activist in San Jose, California and the surrounding Silicon Valley.  Gross was born and raised in McGehee, Arkansas in 1921. In Arkansas, Gross lived under Jim Crow Laws (legal segregation) and picked cotton during the Great Depression. He was inspired to oppose racial discrimination after being restricted from entering the downstairs area of a theater with a white friend and forced instead to sit upstairs.

Gross’s activism began during his senior year at Lake Village Central High in Lake Village, Arkansas, when he led a successful protest against discrimination and segregation within the school.

In 1948, Gross left Arkansas for the first time when he was inducted into the U.S. Army. After his discharge a year later, he moved to Richmond, California, and went to work for the Ford Motor Company.  In this capacity, he joined UAW Local 560 and immediately became active in union politics.  In 1950 he became the first African American elected to Local 560’s bargaining committee. In that capacity he was responsible for handling grievances at Ford’s Richmond plant.

Gross’s success in this position led to UAW President, Walter Reuther appointing him as Local 560’s housing committee chairman in 1954. Gross was responsible for making sure that Local 560 workers—regardless of race—had comfortable and affordable housing when Ford relocated its plant from Richmond to Milpitas (near San Jose) in 1955. To ensure that goal, Gross and other union leaders created the Sunnyhills cooperative development, the first planned interracial community in America sponsored by a labor union.

By the 1950s Gross extended his union activism into the civic arena.  In 1961 Gross, with UAW backing, became the first black city councilman in Milpitas. His election received national attention when he was profiled in Look and Life magazines. Then in 1966 Gross was elected mayor and reelected again in 1968. At the time he was the only black mayor of a predominately white town in California.  As mayor Gross fought his city’s annexation by San Jose and presided over its phenomenal growth.

Gross was also now a national leader in the UAW’s support of civil rights activism in the South. As chairman of Local 560’s civil rights committee he participated in the March on Washington in 1963, The Selma to Montgomery March (for voting rights) in 1965 and the Poor People’s March to Washington in 1969.

In 1971, Gross left Milpitas for Detroit to become Assistant Director of UAW International’s Civil Rights Department. Here he handled civil rights grievances within the UAW and helped southern black politicians like Mississippi’s Mike Espy and Georgia’s Cynthia McKinney get elected. Gross remains active with the UAW as is one of twelve retirees who comprise the UAW Appeals Committee, which handles the Union’s major in-house grievances.