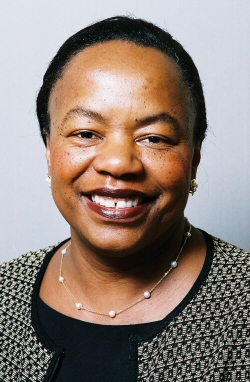 An activist, politician, and leader of her community, Sharon Sayles Belton was the first African American and first woman mayor of the city of Minneapolis, Minnesota. A St. Paul native, Belton was born on May 13, 1951.  For most of her life she fought for racial equality, women, family and child care issues, youth development and neighborhood development.

Belton, one of four daughters of Bill and Marian Sayles, moved to Minneapolis to live with her father after her parents’ separation. In Minneapolis, Belton attended Central High School and volunteered at Mt. Sinai Hospital in her spare time but eventually accepted a paid position at the hospital as a nurse’s aide.  Belton received her Bachelor of Science in biology from Macalester College in 1973 and developed plans to become a pediatrician.

Those plans were jettisoned when she began working as a parole officer for sexual assault offenders. Her work prompted her to call for tougher penalties for sexual predators. In 1978 Belton co-founded the Harriet Tubman Shelter for Battered Women in Minneapolis. She also got involved in community crime prevention programs and worked to reduce community-police tensions.

Belton, by this point an activist in the Minnesota Democratic Farmer-Labor (DFL) Party, was elected in 1983 to the Minneapolis City Council where she represented the 8th Ward.  The following year she was a Minnesota delegate at the Democratic National Convention in San Francisco where she witnessed the nomination of Minnesota Senator Walter Mondale for President of the United States.

In 1990 Belton was elected President of the Minneapolis City Council.  Three years later she announced her candidacy for mayor.  Belton won the election and served two terms as mayor from 1994 to 2000.  Her achievements included a 16% reduction in the city’s crime rate, and a successful campaign to revitalize downtown Minneapolis.  By the end of the 1990s Minneapolis saw its first population increase since the 1940s.  Belton was credited with reversing a fifty year economic slide.  Despite those achievements Belton lost the DFL endorsement and was defeated in the primary by fellow Democrat R.T. Rybak who became the city’s next mayor.

Currently, Belton is a senior fellow at the University of Minnesota’s Roy Wilkins Center for Human Relations and Social Justice where she works on anti-racism initiatives.  Belton has received the Rosa Parks Award from the American Association for Affirmative Action, and the Gertrude E. Rush Distinguished Service Award presented by the National Bar Association. Belton also helped establish the National Coalition Against Sexual Assault.