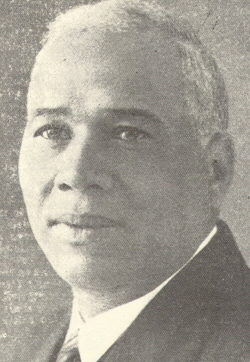 Charles Bellinger, a businessman and political leader, was born in Caldwell County, Texas on April 15, 1875.  From his youth on a farm he moved to Lockhart and worked in a saloon.  With his savings as well as loans, he opened a saloon in San Antonio during 1906 and also became known as a gambler.  His businesses grew to embrace a café, a pool hall, a baseball team, real estate sales, a taxi service, a barbershop, a theater, a private lottery, loans, and liquor sales in the prohibition era.

Bellinger became active in city politics during 1918 when he joined African American ministers to organize black voters for several successful candidates for mayor and other local offices.  These city leaders responded with water and sewers, street paving and lighting, a library and auditorium, and better schools and playgrounds in African American neighborhoods.  Bellinger also founded the San Antonio Register, with his son Valmo as editor, to represent his political views and the interests of the black community.  African American voting in San Antonio led legislators to enact a state white primary law during the 1920s, which resulted in federal court judgments ending such disenfranchisement by the 1940s.

Political conflicts in the 1930s led to charges against Bellinger for evading income taxes, which resulted in a fine and brief penitentiary time.  President Franklin D. Roosevelt granted Bellinger a parole because of illness, and pleas from San Antonio leaders and his family.  Charles Bellinger died June 14, 1937.