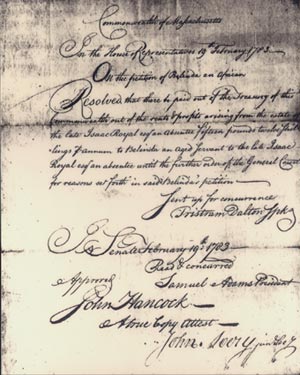 Belinda Royall, whose name appears in some documents as Royalle, was born in 1712 in Ghana, Africa. She was kidnapped from her home near the Volta River when she was 12 years old. Her description of her abduction captured in an 1783 petition vividly describes the horror of the slave trade when she recalls “an armed band of white men, took many of [my] countrymen in chains.” Isaac Royall, an Englishman, bought her, and she served as a slave in the Royall home in Massachusetts. Isaac Royall, a Tory, flew to Nova Scotia when the American Revolution began.

The revolutionary discussions of freedom and liberty no-doubt inspired Belinda Royall to challenge the status quo. When Isaac Royall left for Nova Scotia, he abandoned his slaves, forcing them to find ways to survive on their own. Belinda Royall, who was 63 years of age at the time, asserted what she saw as her right to compensation for her years of service to her former master. She petitioned the General Court (legislature) of the Commonwealth of Massachusetts on 1783. Her petition, presented by her lawyer, contained few legal arguments and instead describes her childhood happiness in Ghana nurtured and supported by the love of her parents. It contrasted her childhood with her later legal status as an enslaved person. The argument persuaded the General Court to award her an annual pension of fifteen pounds and twelve shillings.

Belinda Royall’s petition was a reminder that the “peculiar institution” of slavery existed in Northern colonies such as Massachusetts at the time of the American Revolution. It also challenged the then prevailing stereotype of the submissive slave, happy with his lot. Although Isaac Royall’s abandonment of Belinda and the other slaves ironically granted them their freedom, Belinda Royall became one of the first former slaves to raise a reparations argument, suggesting that an enslaved person had the right to financial compensation for her work. This argument represented a new strategy in the campaign to destroy slavery. Very little is known of Royall’s life after the action of the General Court.