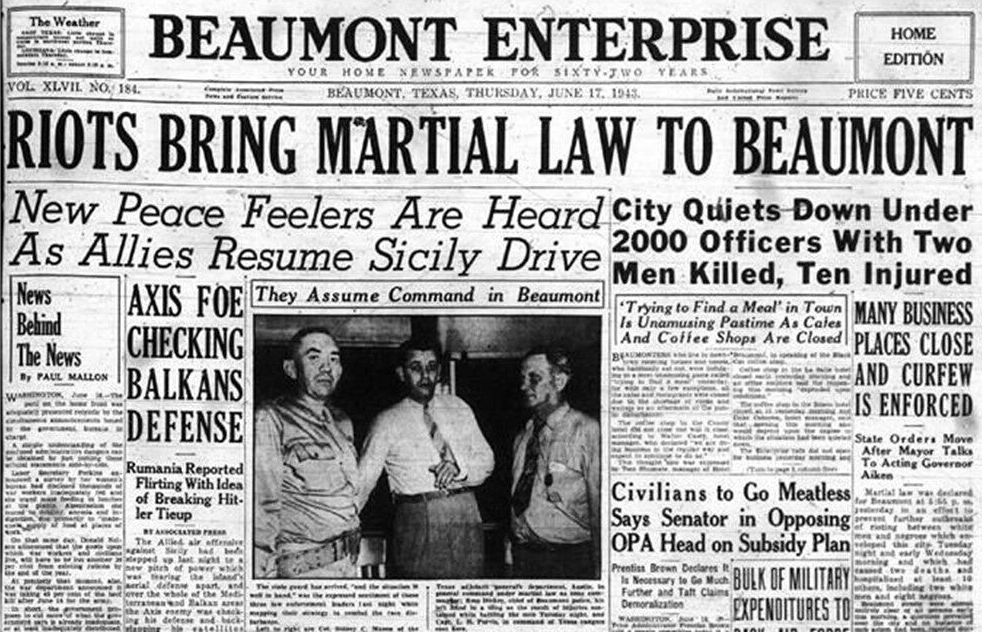 The Beaumont Race Riot of 1943 was sparked by racial tensions that arose in this Texas shipbuilding center during World War II.  The sudden influx of African American workers in industrial jobs in the Beaumont shipyard and the subsequent job competition with white workers forced race relations to a boiling point.

The riot itself exploded on June 15, 1943 with most of the violence ending a day later.  White workers at the Pennsylvania Shipyard located in Beaumont, Texas confronted black workers after hearing that a local white woman had accused a black man of raping her.  The woman who made the accusation was later unable to identify her attacker from the number of black inmates held at the city jail.

Nonetheless, on the evening of June 15, about 2,000 shipyard workers and an additional 1,000 bystanders marched on City Hall when they learned that a suspect had been jailed.  The number of people eventually reached 4,000 as the mob approached City Hall.  Once there, the mob splintered into smaller groups and began to break into stores and destroy property located in the black neighborhoods near downtown Beaumont.  Black citizens were assaulted while whites looted and burned black stores and restaurants.  More than 100 homes of black Beaumont residents were ransacked.

Mayor George Gary called in the Texas National Guard late on the night of June 15, and acting governor A.M. Aiken Jr. declared Beaumont to be under martial law.  About 1,800 guardsmen entered Beaumont along with 100 state police and 75 Texas Rangers at that time.  Upon their arrival an 8:30 p.m. curfew was established.

The Texas Highway Patrol placed roadblocks around the city to seal it off against rural whites who threatened to join the mob.  The Army and Navy also made the town off-limits to nearby military personnel.  Within the town, all activity came to a halt.  Local bus lines were ordered to stop running, and buses scheduled to stop inside of Beaumont were rerouted to go around the city.  Mayor Gary closed all liquor stores, parks, and playgrounds to prevent the gathering of large crowds.  Black workers were barred from going to work.  The curfew was lifted the next day on June 16, and the guardsmen left the town.

The declaration of martial law was lifted on June 20.  During the five day period 21 people were killed.  Also 206 people were arrested and tried in court on June 20.  Of those arrested, only 29 were actually charged with specific crimes, mostly assault and battery, unlawful assembly, and arson.  The rest of those arrested were released.  No one was specifically held responsible for the deaths during the riot.  Although black and white workers returned to the Pennsylvania Shipyard, war production in the area was slowed for months.