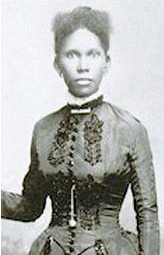 Mother Mathilda Beasley (née Taylor) was the first African American Roman Catholic nun in Georgia. Much of Beasley’s life—including the circumstances that led to her freedom, her move from her birthplace in New Orleans, Louisiana to Savannah, and her conversion to Roman Catholicism—remain a mystery. What is known, however, is her birth year (1832) and her lifelong commitment to the care and education of black children of Savannah.

Born to an enslaved mother in New Orleans and probably orphaned at a young age, Beasley made her way to Savannah and joined the small community of free people of color in the booming port city sometime in the early 1850s. Before the Civil War, Beasley supported herself through work as a seamstress and waitress. Throughout the 1850s, Beasley also ran a secret school for enslaved and free black children, in contravention of Georgia law which prohibited the education of people of color.

In 1869, Beasley was baptized into the Roman Catholic Church at St. John the Baptist Cathedral in Savannah. While it is not known what led to her decision to convert, there is some speculation that Abraham Beasley, her future husband and the owner of the restaurant at which she worked, was Catholic. Mathilda may therefore have accepted baptism in the Catholic Church as part of the preparations for her marriage, which followed less than a month after her baptism.

Abraham and Mathilda did not have any children of their own together, though Abraham had a son from a previous marriage. When Abraham, a moderately wealthy African American man, died in 1877, he bequeathed his considerable assets, including cash savings, businesses, and land, to Mathilda who in turn donated the whole of the Beasley estate to the Roman Catholic Church. There is some speculation that her decision to donate his wealth was an attempt to atone for her deceased husband’s role in the Savannah slave trade, from which he had derived a portion of his wealth.

Beasley travelled to York, England in 1885 and there entered the Franciscan monastic order. Returning to Savannah in 1887, Beasley opened an orphanage she named St. Francis Home for Colored Orphans. Beasley founded the first community of African American nuns in Georgia in 1889. These nuns followed the rule of the Franciscan order, though they were never able to officially affiliate with the Order of St. Francis. The small group of nuns also staffed the orphanage. Beasley continued to work as a seamstress as well, donating the money she earned to the poor of Savannah.

Mother Mathilda Beasley passed away while in prayer in her chapel on December 20, 1903 in Savannah at the age of 71.