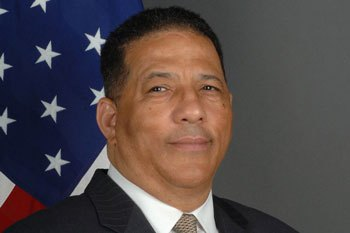 Michael Battle is an educator, religious leader, and diplomat. Born on July 28, 1950, in St. Louis, Missouri, he was one of twelve children from Jessie Battle Sr., a Pentecostal pastor, and Mary Battle.  Michael received his bachelor’s degree from Trinity College (1973), his Master of Divinity degree from Duke University (1976), and his Doctor of Ministry degree from Howard University (1994).

Throughout all of these professional endeavors, Dr. Battle was dedicated to educating young people and promoting linkages between U.S. churches and other non-profit organizations, corporations, foundations, and government entities to work together to solve some of society’s most pressing challenges.

Battle’s leadership was recognized by President Barack Obama who, in 2009, nominated him to serve as the U.S. ambassador to the African Union (AU) and the U.S. permanent representative to the United Nations Economic Commission for Africa (UNECA). After confirmation by the U.S. Senate, Ambassador Battle traveled the AU headquarters in Addis Ababa, Ethiopia, where he would be the president’s official representative to the fifty-three-nation organization. There he would lead U.S. efforts to work closely with the African nations on pressing issues such as peacekeeping in Sudan and Somalia; promoting democracy and political transparency, and a free press; increasing economic development and prosperity; counterterrorism; and, combating HIV/AIDS and other infectious diseases.

In addition to guiding U.S.-Africa engagement with the AU, Ambassador Battle also used his platform to continue his role as an educator. As he had promised the U.S. Senate during his confirmation hearing, he was committed to promoting academic exchange of talent. He showed these commitments to education and exchange by spending time meeting and talking with many student and youth groups, which included U.S. students visiting the continent, as well as with African youth groups on the continent.

Ambassador Battle left his post at the AU in 2013, returning to the United States and private life.  Included among his many professional activities are serving as chair, The Robert W. Woodruff Library at Atlanta University Center; member of the United Negro College Fund (UNCF) Institutional Board of Directors; member of 100 Black Men of Atlanta; and member of the Historically Black Colleges and Universities Congressional Forum Steering Committee.

Ambassador Battle and his wife, Linda Ann, have three children.