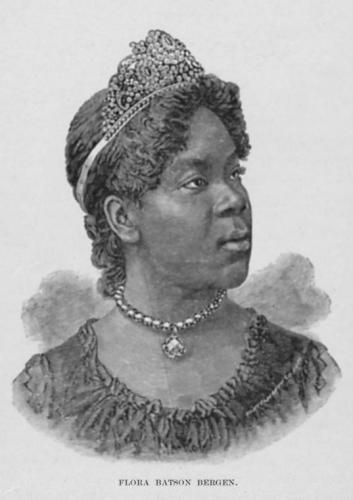 Flora Batson was an internationally acclaimed concert singer of the nineteenth century whose talent and prestige earned her the title “Queen of Song.” She was born on April 16, 1864 in Washington, D.C., to Mary A. Batson, a Civil War widow. Mother and daughter moved to Providence, Rhode Island in 1867 when Batson was three years old.

Growing up, Batson sang in local choirs, and starting in 1878 she sang for Storer College in Harpers Ferry, West Virginia for two years. Declining an offer to study music on a full scholarship at Storer College, Batson continued her singing career under the management of social reformer Thomas Doutney at various temperance revivals. One such performance in New York City, New York’s Masonic Temple in 1885 launched her professional career. To much critical acclaim, she sang “Six Feet of Earth Make Us All One Size” for ninety consecutive nights and caught the attention of John G. Bergen, the white manager of the all-black Bergen Star Concert Company. She accepted his invitation into the company, and by 1887 she had achieved national fame as its leading soprano.

Batson married Bergen on December 13, 1887 and their controversial interracial marriage made international tabloid headlines. Their union was mutually beneficial as he continued to manage her career and she brought fame and critical acclaim to his company well into their marriage. After Bergen’s death in 1896, she toured with African American basso Gerard Millar, whom she eventually married. At the height of her career she toured internationally and sang for many world leaders including Pope Leo XIII, Queen Victoria of England, and Queen Liliuokalani of Hawaii.

Early in her career Batson came to be known as the “Double-Voiced Queen of Song” in reference to her soprano-baritone range. Loved not only for her impressive range, but for her sweet tonal quality and her compelling stage presence, Batson occasionally sang excerpts from operas.  Her signature musical genre, however, was the ballad, often singing “The Last Rose of Summer,” “The Cows Are in the Corn,” and “The Ship of Fire,” for example. Her concerts usually ended with enthusiastic standing ovations and as a tribute to her title, “Queen of Song,” different cities often presented her with diamonds, tiaras, and other jewelry.

As vaudeville comedy sketches came into popularity, however, Batson’s skills as a concert soloist were in less demand. Later in her career she sang primarily for charities and religious organizations, choosing philanthropy over profit-making performances. Her last concert was at the Bethel African Methodist Episcopal Church in Philadelphia, Pennsylvania on November 29, 1906.