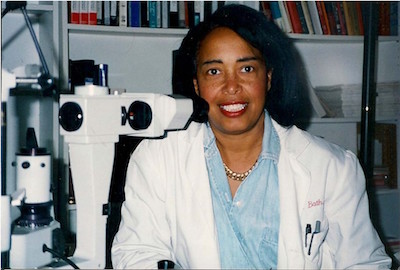 Patricia Era Bath, a prominent ophthalmologist and innovative research and laser scientist, was the first African American woman physician to receive a patent for a medical invention.  Bath was born on November 4, 1942 in Harlem, New York to Rupert Bath, a Trinidadian immigrant and the first black motorman in the New York City subway system, and Gladys Rupert, a domestic worker.  In 1959, while in high school at Charles Evans Hughes, she received a grant from the National Science Foundation to attend the Summer Institute in Biomedical Science at Yeshiva University. There, she studied the relationship between stress, nutrition, and cancer.  In 1964, Bath graduated from Hunter College in New York City with a B.S. in chemistry.  Four years later, she received her medical degree from Howard University Medical School in Washington, D.C.

The start of Bath’s medical career has been one that broke many racial and gender grounds.  From 1970 to 1973, she completed her training at New York University School of Medicine as the first African American resident in ophthalmology. While a young intern at Harlem Hospital and Columbia University, Bath noticed the contrast between the eye clinic of Harlem where half of the patients were visually impaired or blind and Columbia, where only a few patients suffered from blindness.  Because of this, Bath conducted a study and found that blindness among blacks was double that among whites due to the lack of access of proper eye care in black communities.  In an attempt to remedy this alarming problem, she proposed a new worldwide system known as community ophthalmology in which trained eye care volunteers visit senior centers and day care programs to test the vision and screen for cataracts, glaucoma, and other serious eye conditions.  Through this community outreach program, under-served populations whose eye conditions would have gone untreated have a better chance to prevent blindness.

In 1974, she completed a fellowship in corneal and keratoprosthesis surgery (a procedure that replaces the human cornea with an artificial one).  In that same year, she moved to Los Angeles where she became the first African American woman surgeon at the UCLA Medical Center, and she was also appointed assistant professor at Charles R. Drew University.  In 1975, she became the first woman faculty member of the UCLA Jules Stein Eye Institute.  Despite her many accomplishments and brilliance in ophthalmology research, the department offered her an office in the basement next to the lab animals.  She refused to take the spot but continued to do her work despite numerous incidences of gender and racial discrimination.  In 1977, she and three colleagues founded the American Institute for the Prevention of Blindness.

In 1981, Bath traveled to Berlin University to learn more about laser technology and to continue her research that had been continuously stymied by the racial and gender politics of UCLA. The Laser Medical Center of Berlin West Germany, the Rothschild Eye Institute of Paris, France, and the Loughborough Institute of Technology in England accepted the merits of her research. Over the next five years, she began developing a model for a laser instrument that tested the removal of cataracts.  In the meantime in 1983, she chaired the ophthalmology residency training program at Drew and UCLA, becoming the first woman to hold that position in the nation. On May 17, 1988, Bath received a patent for her invention, the Laserphaco Probe, and the new technique used for cataract surgery. The device restored the sight of thousands of patients worldwide and was the only one available for the removal of cataracts. Bath’s contributions changed the field of ophthalmology.

In 1993, Bath retired from UCLA Medical Center but continued to advocate for fighting blindness. In 2001, she was inducted into the International Women in Medicine Hall of Fame.

Dr. Bath was married to Dr. Beny J. Primm.  They had one daughter, Eraka Patty Jene Bath. Dr. Bath died in San Fransciso on May 30, 2019, after a brief illness. She was 76 years old.  She was survived by her brother Rupert, her daughter, and a granddaughter.