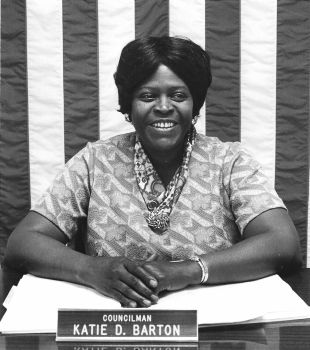 When thirty-year-old Katie Barton followed her husband to the small town of Pasco in Washington State in 1948, she did not foresee that she would embark on a life of fighting for black equality and serving her community, nor did she envision becoming the first black woman to serve on the Pasco City Council.

Barton was born Katie D. Morgan to parents Isam and Carrie Morgan in Gonzalez, Texas in 1918.  In 1948, Katie Barton joined her husband Marion Barton in Pasco, Washington.  He had left Texas several months earlier to work on the Hanford Engineering Works, part of the federal government’s top secret Manhattan Project. Marion Barton was one of 15,000 black workers who worked on the Manhattan Project during World War II.  Instead of acceptance, these black workers encountered hostile, racist attitudes from the white residents of the Tri-Cities, named for the three cities of Richland, Kennewick, and Pasco. In fact Pasco was the only city that allowed black residents, and only under the condition that they live east of the railroad tracks. Living conditions were appalling.  The city did not provide water or regular garbage service for most of the black residents in east Pasco. Segregation was not only limited to housing, but also extended to transportation, and many businesses refused to serve blacks.

Prior to moving to the Tri-Cities, Katie Barton had envisioned a friendly atmosphere in the north.  The harsh bigotry of her newly adopted hometown shocked her. She stated that the relationship between blacks and whites in Texas was reasonably harmonious, and blacks were not hated by whites. In the Tri-Cities, however, in 1957 her teenage daughter was stopped from attending a dance at the Social Club supposedly open to all local teenagers. Moreover, one of her friends, after being arrested for a petty offense, was escorted from Kennewick back to Pasco because the former city did not want an African American in its jail.

Because of these and similar incidents, Katie Barton immersed herself in civil rights activities in the Tri-Cities. She became active in a variety of organizations including the local branch of the National Association for the Advancement of Colored People (NAACP) which throughout the 1960s engaged in civil disobedience demonstrations to protest racial injustice.

In 1969, after Art Fletcher, the first black city councilman in Pasco, resigned to become assistant secretary of labor in the Richard Nixon administration, Katie Barton was appointed to fill his city council seat, and thus became the first black woman to serve on the Pasco City Council.  Barton served on the Council until 1972.

While on the Council, Barton worked for equal opportunity for all citizens of Pasco.  She considered her presence as a council member her greatest accomplishment on the Council as it opened the door for additional city employees and future city council members, such as Joe Jackson.