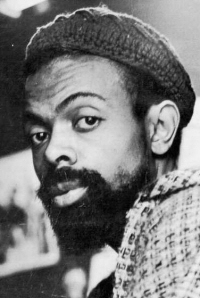 Everett Leroi Jones, poet, playwright, activist, and educator, was born on October 7, 1934, in Newark, New Jersey to Coyt Leverrette Jones and Anna Lois Jones.  He attended primary and secondary schools in Newark and in 1954 he earned a B.A. in English from Howard University.  Jones joined the military that same year, serving three years in the Air Force as a gunner.

Following his honorable discharge, Jones he settled in Greenwich Village in lower Manhattan where he socialized with Beatnik artists, musicians, and writers.  While living in the Village, he also met and married Hettie Cohen, a Jewish writer.  The couple co-edited the progressive literary magazine Yugen.  They also founded Totem Press, which published the works of Allen Ginsberg, Jack Kerouac, and other political activists.

Jones’s own early writings often reflected issues of racial and national identity.  His first book of poetry, Preface to a Twenty Volume Suicide Note appeared in 1961.  In 1963, he published other progressive books like the Blues People: Negro Music in White America and The Moderns: An Anthology of New Writing in America.  As the civil rights movement intensified, Jones’s work as a playwright began to reflect his growing distrust of white America.  Following the moderate success of his plays The Slave (1961) and The Toilet (1962), his reputation as playwright reached a new level with his 1964 off Broadway play Dutchman.   The highly acclaimed, but controversial, production won an Obie Award for “best off-Broadway play” and became a film.

Following the assassination of Malcolm X in 1965, Jones renounced his bohemian lifestyle and divorced Hettie.  He moved uptown to Harlem, and helped usher in the Black Arts Movement by founding the Black Arts Repertory Theatre/School (BARTS) which produced plays for black audiences.  After the school closed in 1967, he returned to Newark and married African American poet Sylvia Robinson (Amina Baraka). The couple founded the Spirit House Players, which produced Baraka’s anti-police brutality plays.

During the late 1960s Jones converted to Islam, changing his name to Amiri Baraka.  He also embraced black nationalist themes and organizations such as US in Los Angeles, California.  He later served as Secretary-General of the National Black Political Assembly and Chairman of the Congress of African People, a Pan Africanist organization. In 1972 Baraka became one of the lead organizers of the National Black Political Convention held in Gary, Indiana.  By the mid 1970s Baraka underwent another philosophical change and became a Marxist, supporting the overthrow of capitalism.

During Baraka’s career, some of his writings have been criticized as being homophobic, sexist, and anti Semitic.  His post published 911 poem “Somebody Blew Up America” caused such a controversy that New Jersey Governor Jim McGreevey abolished Baraka’s title of New Jersey Poet Laureate in 2002.  However, that same year, in a political compromise, state officials bestowed on the artist the title of poet laureate of the Newark Public Schools.

Baraka’s numerous literary honors and awards include the Guggenheim Foundation, the Langston Hughes Award from the City College of New York, the Rockefeller Foundation Award for Drama, and induction into the American Academy of Arts and Letters.

After serving as a visiting professor at several universities, including the New School for Social Research, San Francisco State University, Yale, and George Washington University, Baraka in 1985 began teaching in the Africana Studies Department at the State University of New York in Stony Brook where he remained for two decades.  Baraka was Professor Emeritus at Stony Brook and in the first decade of the 21st Century resided in Newark where he was co-director of Kimako’s Blues People, a community arts center.