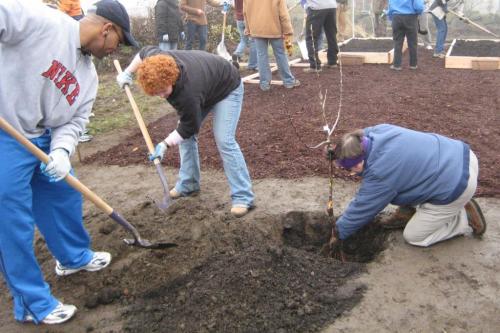 In the following article University of Washington, Tacoma student Kayomi Wada describes how she and other Tacoma residents banded together to create a local project that reflects President Barack Obama’s Call to Service.

As a fourth-generation Japanese American, whose family made their living in the New World farming, I have held onto the belief that some sort of agricultural acumen would transfer down the decades if I were to sow some seeds. After the death of innocent houseplants and various herbs hanging perilously out my apartment windowsill, I decided it was time to actually put some research into the endeavor. Of course, this remained on my to-do list, as I recalled how easily I thought gardening should have come. Perhaps my strongest push toward creating the garden had less to do with my farming heritage, and more to do with the patriotic line in my family, my grandfather served in World War II even though his family was interned, how could I not answer President Obama’s call to service? I never was into the war thing, but community service? Sign me up!In our current financial crises, Americans are getting edgy and I have always found going out in the great outdoors a nice thing to do when that happens. Well, of course, when it comes to growing a garden of fresh veggies to help feed those of us who have a hard time purchasing them, that seems like a nice thing to do as well. Judging by the almost 80 volunteers who came out to build a garden in Downtown Tacoma to help feed our low-income and homeless neighbors, I would have to say there are a lot of Americans out there just waiting for an opportunity to give back!

I have been a huge supporter of Barack Obama throughout his campaign, and inspired by his message, I did door-to-door canvassing. Being able to meet people in my neighborhood and talk to them about effecting real change in the community was really amazing and helped motivate me to do more community work. My work with the Obama campaign also prepared me for organizing the volunteer event, in addition to local media outlets, I received assistance from Ramey Ko from www.AsianAmericansforObama.com, who helped me promote on the internet. Initially, the idea for the garden seemed pretty straightforward, it was something the University of Washington Tacoma campus community desired and it would be a great natural resource improvement to Downtown Tacoma. However, Bridget Mason and I wanted the project to be more than just a nice green plot, and wrote a grant to fund a more expansive project. The Giving Garden:

The Giving Garden is a bit personal as well. UW Tacoma has expanded into what was once a thriving Nihonmachi, Japantown, before WWII internment. One of the hearts of the community, the Tacoma Buddhist Temple, is where I attend services every Sunday with my grandfather, now 94 years old. As UW Tacoma has been expanding even further, we now own property rights next to the temple, where the garden is located. I like to think that our Giving Garden is a little space of goodness to all the farmers like my grandfather.

This article also appears in the Huffington Post. It is reposted with the permission of the Author.