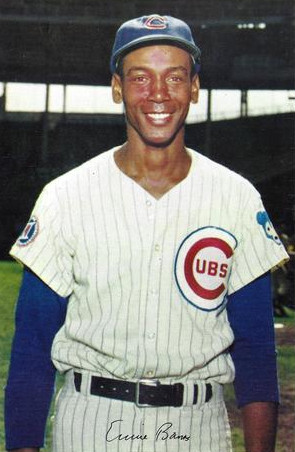 Ernest Banks was born on January 31, 1931 in Dallas, Texas. Ernie’s father bribed him to play baseball at a young age, but in high school he was a standout in basketball, football and track. When Banks was 17, he signed a contract with the Amarillo Colts, an all-black barnstorming (exhibition) team for $15 per game, and then in 1950 he signed with the Kansas City (Missouri) Monarchs in the Negro American League.  He spent two years serving in the U.S. Army during the Korean War and then returned back to the Negro leagues in 1953. After a season with the Kansas City Monarchs, he signed a contract with the Chicago Cubs, becoming the first African American player for the Cubs. Banks debuted in the major leagues with the Cubs on September 17, 1953, wearing the number 14.

Banks retired as a player on December 1, 1971, but was signed on as a coach for the Cubs. On May 8, 1973, Banks technically became the first African American MLB manager when Cubs’ manager Whitey Lockman was ejected from the game. Banks filled in as the manager and won the game 3-2 in 12 innings.

In 1982, Banks’ number 14 was retired by the Chicago Cubs, the first number retired by the organization.  The Cubs also honored Banks by placing his statue in front of the entrance to Wrigley Field on March 31, 2008. In 2013 President Barack Obama awarded Banks the Presidental Medal of Freedom in a White House Ceremony.  Ernie Banks died in Chicago on Janaury 23, 2015, eight days shy of his 84th brithday.  He is survived by his wife and daughter.