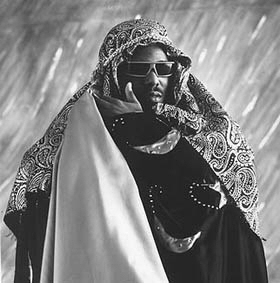 One of hip-hop culture’s most influential pioneers, Afrika Bambaataa was the first to articulate an ideology for the emerging youth culture, using the music to illustrate hip-hop’s expansive potential as a global movement. As a DJ and recording artist, Bambaataa embraced every musical genre to establish hip-hop as an aesthetic form based on juxtaposition and appropriation. As a leading spokesman for the hip-hop generation, Bambaataa delineated the four elements of hip-hop as rapping, DJing, breakdancing and graffiti-writing, giving the manifold trends of late seventies minority youth in New York City a definitive coherence.

From his childhood in the Bronx River Projects, Bambaataa was a natural leader and by his early teens he rose to command ranks in the neighborhood’s dominant youth gang. As his focus moved to throwing parties around the neighborhood, he was blessed with an instant following, which only grew as his recognition as the borough’s preeminent DJ became widespread. In 1982, along with his crew of MCs and DJs, the Soul Sonic Force, Bambaataa released “Planet Rock,” one of the most influential early hip-hop songs, which is also credited as one of the leading inspirations for the forthcoming electronic musical genres.

That Afrika Bambaataa’s real name is unknown (though it is often incorrectly sited as Kevin Donovan) speaks to his iconic status in the history of hip-hop. An excavator of mythologies in the creation of his own, Bambaataa named the international hip-hop awareness group which he founded, The Zulu Nation, after the Africans fighting British colonization in the 1964 film Zulu. In his music and his life, Bambaataa linked divergent ideologies into a cultural amalgam that stressed positivity and community, providing a strong social conscience to an African American art form often mislabeled as negative and consumerist.